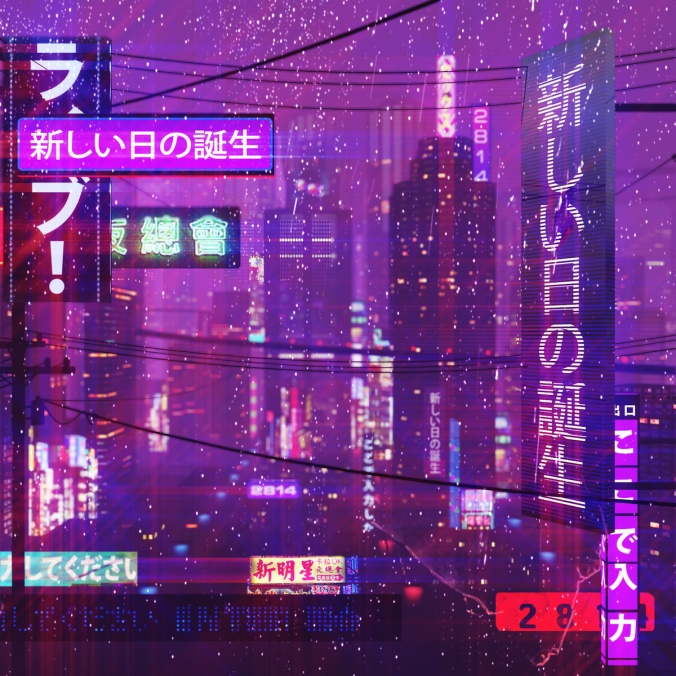 Sometimes there’s no better way to discover music than aimlessly sliding through the dark dream of the internet.

One day at the office I was looking for something that I could drift to. I wanted a sound that stretched like taffy until it reached the horizon. I needed my surroundings blurred beyond recognition, smeared into the very fabric of reality. With 新しい日の誕生 (Birth of a New Day) by 2814, I found exactly what I was looking for.

As a writer, I rarely listen to vocal music while doing my job. The lyrics work their way into my hands, spilling into whatever piece I’m trying to finish. It’s too much of a distraction; I lose all focus. Some people do fine with hip-hop or pop music blasting while they write, and I almost envy them. Instead, I’ve settled into a groove with certain genres that help me stay on task, creating an aural environment to work in. This means that I end up playing a whole lot of jazz, techno, and ambient music for 8 hours a day, 5 days a week. It also means that I’m forever seeking new music with a similar hypnotic effect.

One such genre that frequents such soporific sounds is vaporwave, a label that I’d been very slow to embrace. If you’re not familiar, it’s a kind of sample-based electronic music that takes cues from a broad range of sounds, chopping or blurring them into oblivion. The effect can arrive wildly different, with frantic psychedelia at one end and new age bliss at the other. It’s often about subverting the original context and calling attention to the artificial emotional cues of corporate muzak, the kind of made-for-background tunes that occupy the empty corners of commercial space. In this way, it’s both nostalgic and critical when examined. Unexamined and simply enjoyed at face value, it’s an otherworldly next step beyond the familiar sounds of dream pop, techno, or ambient music.

To me, much of what I first heard in the genre was conceptually engaging, but dull in execution, even lazy sounding. But a few works emerged that not only helped me appreciate the idea behind their creation; they were pieces of straightforwardly enjoyable music that I played for days on end. Perhaps my current favorite artist, Oneohtrix Point Never, dabbled in these sounds for his Eccojams Vol. 1 mixtape. I started loving James Ferraro and Hype Williams and I needed more.

I eventually found Kwjaz, an album so profoundly out there that I lost interest in the rest of the genre. As I wrote in my best of 2011 list, “I feel echoes of The Avalanches, Rod Steward, Oneohtrix Point Never and hissing pink clouds of joy. Where to, beyond this?”

That question brings me to 2814, to this ambient cyberpunk masterpiece.

This is the official digital artwork for the album.

To be honest, as soon as I saw the cover art, I knew I needed to hear it. I knew what it’d sound like. That rainy, purple tinted cityscape was calling to me, telegraphing the tones I hoped to hear. The fact that it’s a gif gave me an extra jolt of excitement. What can I say? I love progress.

新しい日の誕生 sounds exactly as I’d hoped. The album opens with a softly repeating piano melody, drenched in reverb. A thick slab of dub bass drops in, and a flock of synths tear overhead. It’s all wrapped in a softly breathing glow, gentle as a massage and warm as a mother’s embrace. To listen to this album is to feel cocooned.

The template has been established, and the album doesn’t stray far. What it does within these confines is remarkable, evoking a subtle fluctuation between narcotic dub techno and gelid ambient. My love of both Lee Perry and Brian Eno makes it a flawless mood piece, even before the echo-laden synths arrive. When the elements coalesce, the music conjures effortless drift through cities of pure light.

The heart of the album is a nearly 10 minute passage driven by a languid guitar tone, some sort of neon surf rock transmitting from another dimension. It’s here that an unmistakable cyberpunk mood is established, and where my nostalgia buttons are pushed hardest.

I grew up absolutely fascinated with sci-fi anime because Akira was one of the first Japanese films I’d ever seen, on a dubbed VHS borrowed from a friend. When Ghost in the Shell arrived a few years later, my mind was blown. It was the perfect embodiment of all that I wanted in a film, and as it turns out, a far greater work of art than I realized at the time. The centerpiece of the film, to me, was a wordless sequence in which we see through the main character’s cybernetic eyes for the first time. It’s a simple, poetic sequence that cements the mournful tone of the film while offering a breather from the frantic pace of the story. It’s a moment of transcendent bliss, combining some of the most sublime hand-drawn animation ever with the crystalline score of composer Kenji Kawai. The inevitable cyberpunk future seemed like a dream realized, a time I ached to experience. It’s a handful of minutes I always wished I could live in.

This album, and in particular the track 悲哀, feels like the musical manifestation of that dream. It’s the fleeting moment, caught and expanded into an hour. The album remains incredibly vibrant and deeply moving throughout that time, coloring an ever-shifting structure with the same narrow band of soothing purple tones. This isn’t music to fall asleep to. It’s the soundtrack to the wandering, exploratory thoughts we have in our best waking moments. It’s an ode to those moments of untethered contemplation where epiphanies happen.

Even though I know that beneath everything I’m hearing is a slowed, blurred, remixed, and restructured take on existing tunes, the hypnotic effect is so complete that I get lost in a way that few pieces of music ever achieve.

You can purchase this slice of futuristic bliss from the Dream Catalogue Bandcamp page in digital form or vinyl. Apparently the CD and cassette versions have sold out.