This week has been as busy as ever so I didn’t have a ton of time for new music, but I made up for that with deep enthusiasm for what I did discover.

Thanks to Dam-Funk’s excellent new entry in the DJ-Kicks series, I’ve been looping a certain new-to-me album half a dozen times over the past day alone. I’ve also spent time in one of the most sublime virtual worlds ever created, in The Witcher 3.

Gaussian Curve is a collaboration project, pairing pioneering Italian ambient artist Gigi Masin with younger musicians Jonny Nash of Land Of Light and Marco Sterk, of the UK and Netherlands, respectively. The result of this cross-generational, trans-European encounter is a magical little album called Clouds. I’ve rarely felt so instantly transported to another time and place than when I hit play yesterday.

This is truly introverted music, an insular soundtrack that feels like walking alone as the sun comes up or thinking about the cosmos while laying in a hammock. I’m reminded of the balaeric bliss of CFCF’s recent mini-album On Vacation and best of 2015 release The Colours of Life, as the trio blends earnest washes of synth, guitar, and tropical drumming into a fine mist of atmospheric groove. I also hear the liminal edges of later Talk Talk albums Spirit of Eden and Laughing Stock, the gauzy moments between aching drama the suspend those masterpieces outside of time.

Unlike a lot of modern music that unironically nods to the cheesier end of 80s aesthetics, Clouds is anchored by a serious focus on rhythm. It grants the album an effortless flow, always ending before it’s ready, begging repeat plays.

The heartfelt sincerity and breezy simplicity of this music cannot be overstated. It simply exists, tumbling ever onward in woozy euphoria.

Clouds can be purchased from the Music From Memory page on Bandcamp.

With his entry for Studio !K7’s long-running DJ-Kicks series, Dam-Funk takes the opportunity to teach us about the sound world that comprises his idea of modern funk. As he’s said it himself, his sound is a combination of “funk, boogie, electro, house, modern-soul, ambient tones… a push and pull of nostalgia and progressiveness…” This set makes those words tangible reality, folding in a host of well-known and underground artists with his own collaborations and solo work. The result is on par with Moodymann’s similarly funk-infused DJ-Kicks release from last winter, all warm boogie and booming heart.

The track list includes Moon B, Gemini, Crystal Winds, and my favorite discovery, Gaussian Curve, along with both a solo number called Believer and another grand Nite-Funk collaboration, Can U Read Me?. Almost everything here was new to me, which made it an especially compelling set to dive into.

I’m still parsing out the pieces of this mix, but I can definitively say that he treats the original tracks with the utmost reverence, allowing them the time to fully breathe, giving them plenty of space to unfold before lightly transitioning into the next piece. Despite the relatively hands-off approach, the mix has Dam-Funk’s unmistakeable fingerprints all up and down its 80 minute runtime. He is, after all, sharing a slice of the world he retreats into when he’s not releasing music of his own.

Thanks to Bandcamp, you can listen to the entire set right here:

This DJ-Kicks entry is streaming on Spotify and can be purchased via Dam-Funk’s Bandcamp page.

Here’s an album I’ve been revisiting recently in anticipation of upcoming releases on Dream Catalogue. It’s the first release I heard from the artist now known as HKE, and it’s easily my second favorite project he’s dropped, after last year’s majestic 2814 album.

Despite being my introduction to HKE’s music, this album is actually something of a curveball, leaning more toward the dystopian synthscapes of early Oneohtrix Point Never than the warm vaporwave glow his label became known for. But as someone with an undying affinity for these tones, it’s become one of those comfort listens that I return to a couple times a month when the clouds arrive and I can’t sleep.

A couple weeks ago, HKE wrote about this album on Twitter and I couldn’t help but feel moved by his words. I’m quoting him below because I can’t really say anything more meaningful about it myself.

“My album ‘HK’ was made at the end of 2014, released in January 2015. A lot of people since then have believed it just to be painting a loose picture of Hong Kong through music and think it has little to do with anything beyond that. But really, the album has very little to do with Hong Kong other than some vague dream-like allusions to it in some of the tracks.

“The album is ultimately about being alone and looking out the window at the bizarre dreamworld reality we find ourselves in and finding a certain romantic beauty in that. It’s about being lost in this insane universe, about being a dreamer — reflecting and creating the dream world for yourself.

“In this sense, the use of the title ‘HK’ and the allusions to Hong Kong are more of a subjective injection of my own dreams and fantasies into the music, rather than an objective allusion to Hong Kong. This can also be said of my previous two albums under the name Hong Kong Express, although they are more direct in their Hong Kong implications.

“Why Hong Kong though? Through 2011-2014, at a time in my life where I was dealing with my most severe depression, paranoia and anxieties of death, I got really obsessed with HK / Chinese cinema and through that, Hong Kong as an overall city, it’s culture, architecture and people. I don’t just mean a brief fascination, but I really got lost in this dreamworld in my head out of comfort, even began writing novels that I never finished set in the city and spent lots of time just watching Hong Kong driving videos and obscure stuff I could find on Youtube to lose myself in. It was all a fantasy to distract from my own reality, where I was highly depressed and wondering what I wanted to do with my life.

“In this sense ‘HK’ was just a distant dream for me, an unreachable fantasy land that I went to in my head for a long period in the darkest times of my life. But still, I feel the album is the most organic and real/human thing I’ve ever made, despite its synth-heavy tones. Because the window to dreams is the one where we can find the influence to shape our own future realities

I wrote this passage with the album the night I released it: “The sea of neon rippling waves under a heavy rain that batters the window of the dark hotel room in the middle of the city. There is no point to any of this except beauty. A return of dreams, Hong Kong.”

Hopefully that puts everything more into context

I still feel it is my best ever album, my most personal album and also the album that reflects my inner spirit more than anything I’ve ever made before.”

So that’s that. If you want to listen, here’s the full album:

The album can be found streaming on Spotify or on the Dream Catalogue Bandcamp. 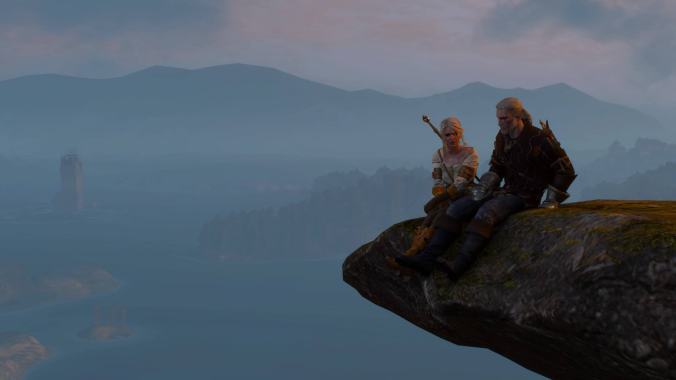 Despite being a sprawling adventure that can easily pass 100 hours of playtime, The Witcher 3 infuses nearly every moment, big and small, with the sensitivity and gravitas it deserves. From the most epic quests down to the simplest optional conversations, there’s a lavish sense of care and attention to detail that feels unlike anything else I’ve ever played. Instead of the loose, disconnected nature of most open world games, even great ones like Grand Theft Auto, Fallout, or Skyrim, this game plays like a true narrative experience from beginning to end. When I boot it up, I get to become Geralt of Rivia and make a splash in his sprawling world, a similar but more warmly realized take on medieval fantasy than Game of Thrones.

This world is full of dark things, wretched violence, sadness, and war. But it is also a place of bucolic splendor, flush with blooming sunsets, farmers tending their golden crops, children playing with cats, and bards singing as they wander the hills. It’s a pleasure to simply mount a horse and ride across the landscape, stopping at points of interest and incredible vistas along the way. When I choose to dive into the story, it’s because I find joy in experiencing the narrative itself. I’m not driven by points, trophies, or any other gamey notions of progress; instead I’m propelled by the very notion of story itself.

As I’ve been exploring again after nearly a year away, I’ve come to realize that I experience Witcher more like I do a great novel than any other game I’ve encountered. It’s so compellingly realized that I pore over ever encounter, every discovery, every opportunity to use Geralt’s heightened senses to unravel a mystery.

Games like this prove that, instead of aspiring to the heights of Hollywood filmmaking, games can go even further, becoming the modern expression of literary ambition that was once the sole purview of novelists. Like the best novels, this game evokes more thematic weight and lived in detail than any film could hope to accomplish. I feel like I’ll be returning to this world many times in the years to come, like an old favorite book.