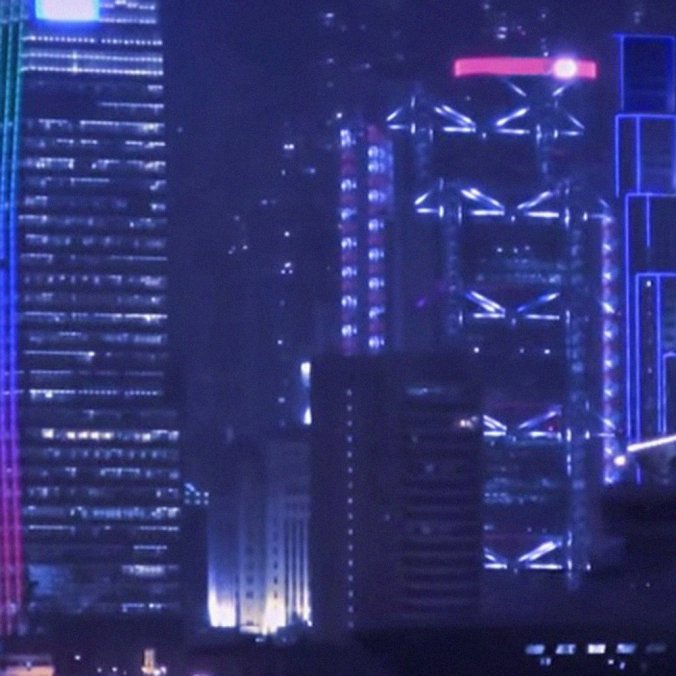 This is the soundtrack to my cyberpunk dreams.

More than almost any other release I heard last year, HK sends me spiraling down the rabbit hole of my subconscious, detached from routine, from worry, from time itself.

I’ve been revisiting HK in anticipation of certain upcoming releases on Dream Catalogue, piecing together the method by which I was first turned on to this sound. The album is the very first release I heard from the artist now known as HKE, and it’s easily the second best thing he’s created, after last year’s majestic 2814 album.

Although this album was my introduction to HKE’s music, it’s actually somewhat of a curveball; the sound leans more toward the dystopian synthscapes of early Oneohtrix Point Never than the warm vaporwave glow his own label made a name with. As a man with an undying affection for these particular tones, I’ve embraced HK as one of those comfort listens that I return to a couple times a month, when the clouds arrive and sleep hides away.

A few weeks back, HKE waxed poetically about this album on Twitter. I felt extremely moved by his words. I’m quoting him below because there’s nothing more meaningful I could say myself. He really grasps what makes his work so vital.

“My album ‘HK’ was made at the end of 2014, released in January 2015. A lot of people since then have believed it just to be painting a loose picture of Hong Kong through music and think it has little to do with anything beyond that. But really, the album has very little to do with Hong Kong other than some vague dream-like allusions to it in some of the tracks.

“The album is ultimately about being alone and looking out the window at the bizarre dreamworld reality we find ourselves in and finding a certain romantic beauty in that. It’s about being lost in this insane universe, about being a dreamer — reflecting and creating the dream world for yourself.

“In this sense, the use of the title ‘HK’ and the allusions to Hong Kong are more of a subjective injection of my own dreams and fantasies into the music, rather than an objective allusion to Hong Kong. This can also be said of my previous two albums under the name Hong Kong Express, although they are more direct in their Hong Kong implications.

“Why Hong Kong though? Through 2011-2014, at a time in my life where I was dealing with my most severe depression, paranoia and anxieties of death, I got really obsessed with HK / Chinese cinema and through that, Hong Kong as an overall city, it’s culture, architecture and people. I don’t just mean a brief fascination, but I really got lost in this dreamworld in my head out of comfort, even began writing novels that I never finished set in the city and spent lots of time just watching Hong Kong driving videos and obscure stuff I could find on Youtube to lose myself in. It was all a fantasy to distract from my own reality, where I was highly depressed and wondering what I wanted to do with my life.

“In this sense ‘HK’ was just a distant dream for me, an unreachable fantasy land that I went to in my head for a long period in the darkest times of my life. But still, I feel the album is the most organic and real/human thing I’ve ever made, despite its synth-heavy tones. Because the window to dreams is the one where we can find the influence to shape our own future realities

I wrote this passage with the album the night I released it: “The sea of neon rippling waves under a heavy rain that batters the window of the dark hotel room in the middle of the city. There is no point to any of this except beauty. A return of dreams, Hong Kong.”

Hopefully that puts everything more into context

I still feel it is my best ever album, my most personal album and also the album that reflects my inner spirit more than anything I’ve ever made before.”

So that’s his take on HK. Since you’ll want to hear it yourself, here’s the full album:

You can also listen to HK streaming on Spotify or make a purchase via the Dream Catalogue Bandcamp.