Roots and Wire is a wide-scope ambient dub excursion by Montreal/Berlin based artist Deadbeat.

END_OF_DOCUMENT_TOKEN_TO_BE_REPLACED

“Old elephants limp off to the hills to die; old Americans go out to the highway and drive themselves to death with huge cars.” 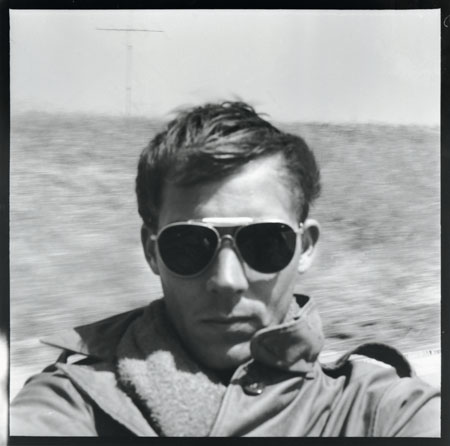 Steve Reich is possibly my favorite living composer.  His strain of mimimalism has coursed its way through several branches of the tree of modern music.  These ideas have proved to be the backbone for a plethora of genres and soundscapes we enjoy today. 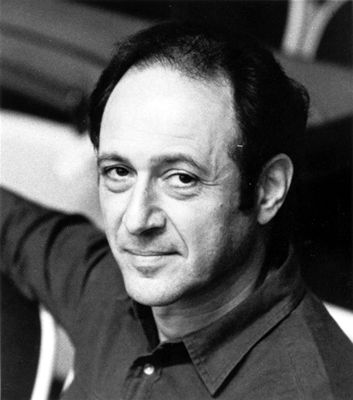 His music feels like the core of something – the central axis of entire galaxies of sound.  Anyone hoping for a solid grounding in modern music needs to get closer.  Reich is scriptural-level essential.  His tones are so identifiable that once you’re familiar, you’ll start to notice the signature embedded in everything.

I’m hoping to avoid giving the impression that listening to Reich is akin to homework, so here’s the real score:

This is some of the trippiest, most hypnotic, enveloping and overwhelming music I’ve laid ears on. The style may be minimalism, but it only feels that way if your volume is turned improperly low.

Here is a first taste of Reich: The original Music For 18 Musicians on ECM records.

While not necessarily the man’s best composition, Music For 18 Musicians is a wonderful introduction to the unique harmonic building blocks with which Reich constructs his work.  Warm oscillations breed an inviting serenity in the first moments, and the listener is quickly whisked down a gently cascading river of sublimity.  Based around an ABCDCBA structure, each section melodically deconstructs a given chord and rebuilds it;  every bit is cyclical, and the whole piece winds into itself at the end.  Perfect symmetry.  It sounds simple, and it is.  Nothing has ever been so divine.

I haven’t felt this floored by such a new artist in… ever. With the small amount of recorded output as evidence, I have no doubt ending in ing will get the attention he deserves.

The simplest and most direct thing I could say about this music is that it’s a perfect amalgam of several exhilarating, timelessly enjoyable elements.  Inducing a euphoric, wide-eyed, windblown hair on a sunny day feeling, this is classically perfect pop construction for the laptop generation.  The only comparison I could personally offer would be to the Avalanches – high praise indeed, but at the expense of the personal nature on display here. This man crafts songs – coherent, concise songs, without so much as a whiff of collage-style construction.  And these songs are made to get lost in. 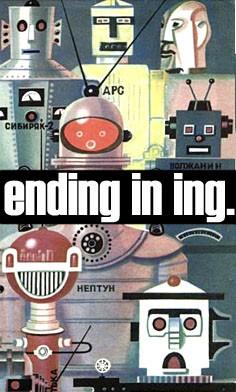 I’m not going to describe the sounds themselves – it’s your job to find out.  PLEASE check out ending in ing’s myspace, as there are several other tracks available for streaming.  The tracks I’ve shared are all free, so be sure to THANK the artist personally, and encourage him to keep producing magic like this.

This band is the funkiest bunch of white guys to emerge from the fertile early-1980’s NYC no wave scene. Featuring one of the most well-known bass lines in recent history, Liquid Liquid are nonetheless relatively unknown to the wider public.

Liquid Liquid is a self-titled collection of everything essential.

To wit: if this band were James Brown, Cavern would be their Funky Drummer.  The moment that transcendent rhythm comes to life on the track, you’ll be awash in familiarity and confusion in the same instant.  Is this White Lines (Don’t Do It) by Grandmaster Flash?  Phenomenon by LL Cool J?  Both.

Despite that track’s endearing, enduring charm, it’s not even the best thing here.  This collection is overstuffed with quality material, ranging from party-ready bangers to truly outré beat and noise explorations.  None of it comes within spitting distance of mainstream pop or modern club music, by any stretch of imagination.  One listen though and you’ll be convinced that the ideas contained are the base root for a wide breadth of modern music, popular and obscure alike.

This LP is actually a set released in 1997 by Grand Royal containing basically everything you could want to hear from the band’s limited output.  First track Optimo will blow you away.  Cavern is next.  You’re now on a dark, funky rollercoaster to the end.

[grab this amazingly fresh and complete set at amazon]

Galaxie 500 are one of the greatest bands of all time.

Yeah, I just said that.

Standing as one of the highest monuments to the phrase “criminally ignored in their lifetime,” Galaxie 500 perfected the blueprint for absolutely blissed-out hazy love sounds in a mere 3 albums before acrimoniously splitting in 1991.  Existing for five years and releasing music for just three, their acknowledged impact on music has grown exponentially in the intervening quarter-century.

Presaging shoegaze with their opioid rhythm section and warm liquid guitar tones, and possessing the unquestioned lineage of anything labeled “slowcore,” they could be unjustly mistaken for Music To Fall Asleep To.  That’s a crying shame.  Although oftentimes I would be hard pressed to think of a better time than lying in bed all day listening to Galaxie 500 on repeat, this music demands close attention.  Allowing oneself to drift off to the narcotic tug is indeed a divine pleasure, but greater rewards await those who sit up, pay attention, and maybe get out in the sunshine while they’re at it.  There is a spiritual element to this music that touches everyone who truly absorbs and becomes absorbed by its spare grace.

This is not to imply it is in any way religious, because it is not.  This is music to truly uplift and affirm.  To warm the soul, soothe frayed nerves, and leave the listener on a higher plane than before he pressed play.  These songs have infinitely larger meaning in their feel than in anything so pedestrian as lyrical content.  In fact, the lyrics are often vague, dreamlike,  and understated; concerned with basic themes of disaffection, longing, ennui, and of course love, the words themselves are not groundbreaking.  The heavenly atmosphere is engendered by the perfectly interweaved instrumentation, the egalitarian balance of every element in the mix, and the effortlessly captivating and timeless melodies Dean Wareham, Naomi Yang, and Damon Krukowski captured on record nearly two decades ago.  These records can accompany a bicycle ride, day at the beach, even a nap perfectly.  It’d be an even larger criminal offense if that’s all they are remembered for.  Galaxie 500 carry the mind and soul aloft, to dance with ideals and hopes and dreams far above the day-to-day reality of earth.

Key tracks: Blue Thunder, When Will You Come Home (one of my absolute favorite songs of all time, no question), Ceremony (excellent cover of early New Order single, arguably better than the original)

Key tracks: Fourth of July, Summertime, Listen The Snow Is Falling (towering, gorgeous cover of a Yoko Ono track – undeniably, exponentially superior to the original), Way Up High, and the bonus track Here She Comes Now (a thundering, aggressive, majestic cover of the Velvet Underground original.  I am a huge VU fan yet still consider this better than the original, again, by a long shot).  Also, hopefully you’ll notice the album is named after a certain Ornette Coleman classic, and aptly so.

Please remember, the ‘key tracks’ are to conjure interest.  They’re entry-points, if you will.  Each of these records are of a piece and meant to be heard as such.  Not that you’ll have any trouble letting them spin after hearing the first track (which I’ve included as ‘key’ for each) and being comfortably locked in for the duration.

So these are the three studio albums released in the lifetime of the band.  Dean went on to form the much more successful Luna, and Damon and Naomi formed, well, Damon & Naomi, but no matter how they tried, never eclipsed the sonic glory of this brief engagement.  As for the music, no individual description is necessary.  I will simply offer that they are one of the most consistent bands to have ever existed.  Though constantly evolving and updating their sound, breaking through subtle barriers with each subsequent release, the entire ethos and drive of the music remained rock solid from day one.  From the moment you first hear Galaxie 500, these tones will have unrivalled distinction as unique as a fingerprint.  Nothing else aproximates the quietly triumphant bliss conjured here.

[purchase Today, On Fire, and This Is Our Music separately at amazon, but keep an eye out at your local independent record shop, as I’ve found the CDs at entirely reasonable prices.  plus you’ve more chance of finding the Peel Sessions, the Uncollected, and Copenhagen (Live) sets as well]

DJ /rupture is a flat-out musical genius. Preternaturally adept at crafting singularly pure mood explorations whole-cloth out of disparate samples, producer Jace Clayton is nearly as well known for his insightful writing on music.  He’s one of my favorite electronic artists working today.  One of my favorites of all time, in fact.  He’s often lumped in with the humble ‘mash-up dj’ category, which is a grave disservice to the prodigious talent he displays, especially on this album.

First things first:  just put the album on now, with a set of headphones (or good stereo with some bass presence).  Press play.  Absorb.  This way, you’ll know what I’m talking about.

Uproot is an album which feels so cohesively unified, hypnotically of-a-piece that one could be forgiven for assuming it’s not sample-based upon first listen.  Every single moment has so much attention paid to the connections and frictions between beats and vocals, synths and strings, pacing and flow, there are simply no seams in the production.  That fact alone places this lp miles above anything traditionally recognized as ‘mash-up’ – this resides on a level closer to Endtroducing or Avalanches than Girl Talk.

Conjuring the ghosts of reggae, dub, afropop, techno, grimy hip hop, dubstep, idm, and even post rock precedents/outliers like Dif Juz or Seefeel, Uproot is a smoky mix of pulsing, impulsively grounded head-nodding beats and extraterrestrial atmospheres.  Vocals and orchestral phrases shift in and out of the mix while a constant bed of low-end throb envelops perception.  The deeply narcotic sense of comfortable oblivion is overwhelming.

By the final withering reverberation Clayton has taken a journey from flute-peppered break beats through modern avant composers to melancholy post-apocalyptic ambience, conveyed en route by dub ideals and echo-laden empathy.  This is an evolution of the soul.  A journey of the mind.  A fucking incredible mix.

Note:  when you obtain Uproot the tags may be crazy – a predictable result with complicated artists like this.  For the proper version check (strangely enough) the last.fm page and simply copy what they’ve got.  This will help you know the prominent sample(s) on each track as well as the proper names.

Be sure to read his blog as well:  mudd up!

[purchase this, as Clayton himself offers:  at iTunes or amazon]