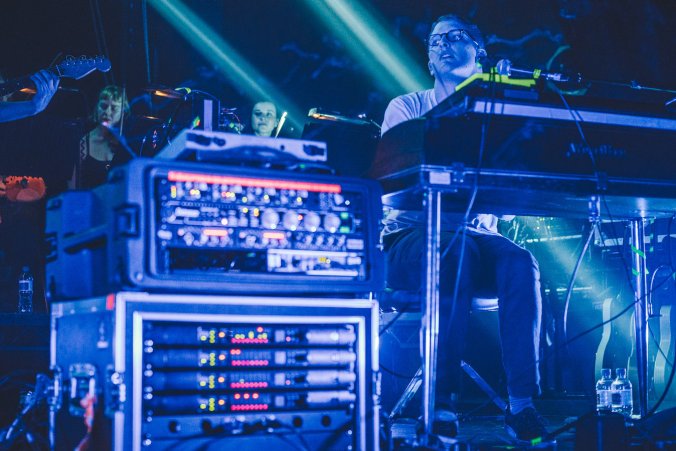 With his 2015 debut LP Elaenia, Floating Points made a startling leap from purely electronic composition to hybrid jazz mastery, using a full band to bring his creations to life for the first time. The album should have been on my best of 2015 list, but I’m doing my best to spread the word going forward.

I’ve been a fan of Floating Points, aka English artist Sam Shepherd, since his earliest singles, compact idiosyncratic near-masterpieces like J&W Beat and the Vacuum EP. He came out of nowhere mixing nascent dubstep textures with the cool detachment of Detroit techno, painted with a rich sense of drama and melody. Nothing else sounded quite like it.

He managed to drift along, dropping singles and deep 12″ cuts for years without ever issuing a proper full-length album. As it turns out, he was working on completing a PhD in neuroscience and epigenetics while slowly building a completely new version of his music, one that leaned deep into cosmic jazz and the quietly genre-agnostic spiritualism of late-era Talk Talk. That sounds especially ambitious, because it really is.

While countless electronic musicians have attempted this crossover in the past, it’s rarely so incredibly realized. This was a full transformation for a guy known for making deep-cut techno and dub-drenched IDM on labels like Planet Mu and his own Eglo imprint. Now his music has fully bloomed into something warm, tangible, and comfortable with the looseness and exploration of live jazz.

The video below shows a live take on his latest track, an 18 minute monster that picks up where Elaenia ended, zooming further out into weird jazz environs with playful spontaneity. After one listen, there’s no question that this is where Floating Points was meant to be all along. It took a strange journey to get here, but the results are undeniable.

The first half builds up slowly, minimalist style snowballing of twinkling Rhodes and light percussion until an arpeggiated guitar emerges bright and clear. The second half explodes in psychedelic histrionics, a spiritual freakout that nods toward prime-era Pink Floyd without any of that band’s indulgent nonsense. It’s an adventure of epic proportions, wrapped in lush colors and propelled by feral drumming.

Here’s a live performance of Kuiper:

Kuiper will appear as a 12″ release July 22 along with lengthy track For Marmish Part I. Preorder the 12″ right from Floating Points. Also, you can listen to the full studio recorded version of Kuiper on Spotify.