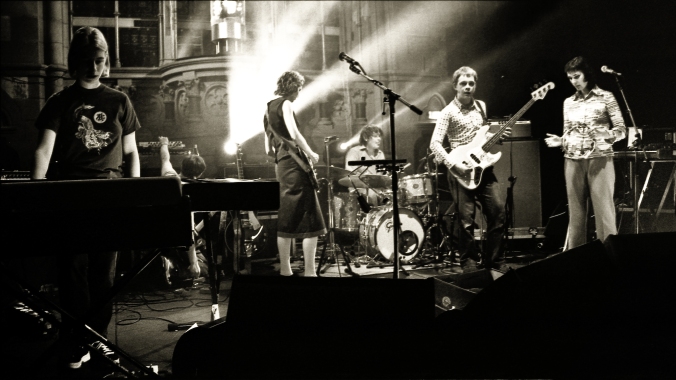 I know I just wrote about Stereolab, but I’m in the middle of a binge. Indulge me?

I just listened to my brand new vinyl edition of the band’s 1997 masterpiece, Dots and Loops. It reminded me that, through all the jazzy sprawl and monastic focus of the album, this dreamy pop song lingered in my mind the clearest.

Ticker Tape Of The Unconscious is not only one of the best song titles ever; it’s one of my favorite songs from a band with over a dozen albums from the early 1990s until now. They have at least a full metric ton of incredible material. Running from from noisy krautrock-inspired jams like Jenny Ondioline to fizzy jazz-pop confections like  Lo Boob Oscillator (which you may have heard in High Fidelity) to electronic dance stompers like “Get A Shot Of The Refrigerator” it’s hard to nail down a definitive sound for the band. I simply don’t try to do that.

I simply love Dots and Loops most for the way it distills an entire ocean of vibraphone-laden jazz and mixes it perfectly with the burgeoning IDM awakening of the late 90s. This particular song might float on a breezy tone, but there’s an undercurrent of saudade, the kind of deep, spiritual longing for something more than life is providing.

It’s love, it’s freedom, it’s expression… and the band chose not to include the lyrics, typically. Stereolab have always expressed themselves holistically, with feeling and sound conveying as much meaning as that brain-tugging title.

If you’re digging this song at all, just give the whole album a try. Thankfully they’ve got nearly every one streaming in full on youtube.

You can buy the album on vinyl from Amazon or stream it on Spotify.

2 thoughts on “Stereolab’s Ticker Tape Of The Unconscious”