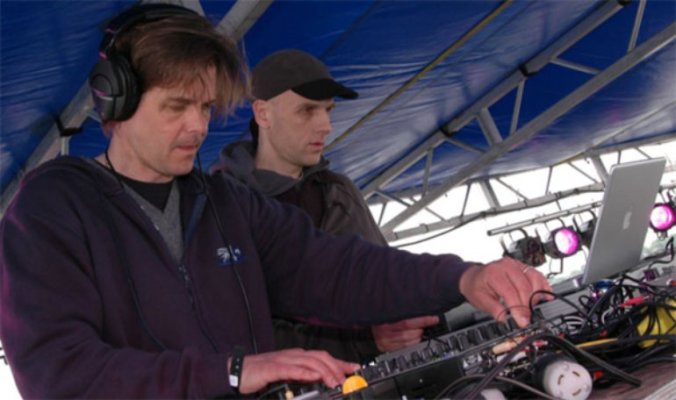 Quadrant Dub is one of the most transcendent pieces of music ever recorded. It stands as perhaps the most important dub techno recording of all, the pinnacle of an entire genre and a beacon for artists to follow for decades. Created in 1994 by Basic Channel, the German due composed of Moritz Von Oswald and Mark Ernestus, this 12″ has done more than stand the test of time; it charges onward, curating its own timeline outside of everyday reality.

Quadrant Dub is the point at which Basic Channel perfected a certain breed of techno, raising an art form into the realm of religious experience. It belongs on a very short list of the most important dance records in existence. Still, it’d be a shame if this legendary status intimidated any potential listeners – the sound is absolutely welcoming, easy as a warm bath to slip into, easy as a forest at night to get lost in.

The album consists of an unassuming pair of tracks, simply titled Quadrant Dub I and II, sprawling over 37 minutes of seemingly limitless time. The entire experience passes in an instant if you surrender, pure bliss suspended far above everyday reality. If you want it, this can become a sort of on-tap meditation, an elemental recording used to send your mind where it needs to go. Unlike most albums that can serve as a thinking man’s sleep aid, Quadrant Dub is absolutely bursting with energy. The trick lies in how that energy is harnessed.

At a glance, this is the scene: Rolling fields of cavernous dub bass flow beneath frosty synth arpeggios, submerging sharp details in an echoing cloud. In the loosest sense, it’s a picture that could describe almost any dub techno recording. This is the conundrum of the genre: once one gets a handle on it, there’s almost no way to make an unpleasant take on it. The very characteristics that define the genre make for an agreeable sonic straightjacket, something to slip on and confine an artist, never venturing outside a compact comfort zone. This is why so many dub techno recordings make for inoffensive wallpaper, forgettable as they are soothing. It’s similar to the phenomenon of ambient music, where – once a certain threshold of talent has been crossed – it’s difficult to make a bad genre record. But even more difficult is the task of making a great genre record.

The crazy thing is, Basic Channel defined the entire genre from above, creating epochal works that transcend mere pleasure-listening. They did it multiple times, across waves of anonymous-looking black platters. Their best tracks exude the qualities that define dub techno while taking a small twist, a bent look at some fundamental aspect, and leaping beyond the borders of its own design.

Listening to Quadrant Dub, I try to pick out a few key elements that tug the song into fresh, interesting directions every few moments: the hushed, distant vocal refrains gain in menace and exultation, rising through the mix while remaining at a steady volume, inverted synths plunge back in complementary waves as the bass swells, the very intensity of the song itself inflates, billowing over the edges of perception every few bars… I realize I’m likely doing a poor job of describing the subtle ways in which this record stands out.

What I really want to convey is the idea that, if dub techno were an ocean, this set is pure, impossible geometry: simultaneously cresting far above the surface, spraying rainbow-tinted mist into the atmosphere, and reaching deep into the darkest trench, playing in the inky blackness where neon creatures hunt.

Quadrant Dub isn’t a particularly rare vinyl find these days, having been quietly repressed a handful of times over the past couple years, but it rarely stands out for a couple reasons. First is the fact that, being so monumentally essential, I’ve listened to my digital copy hundreds of times. It’s become part of the musical fabric of my life, taken for granted like a favorite pair of shoes. The second reason is that the record, like all Basic Channel vinyl, is found in an anonymous sleeve with no indication as to the artist, album, or label. The disc itself notes, in cryptic, blurred lettering, the title and artist, but it’s hard to spot when leafing through stack after stack of music.

Do not let this anonymity fool you. There’s nothing more deeply personal or difficult to describe than a dream, and this album is most certainly a dream.

I found my copy at Gramaphone Records in Chicago, but you can pick it up via Discogs or almost anywhere that sells vinyl online. Don’t pay too much; it’s not that limited. The music, of course, is limitless.