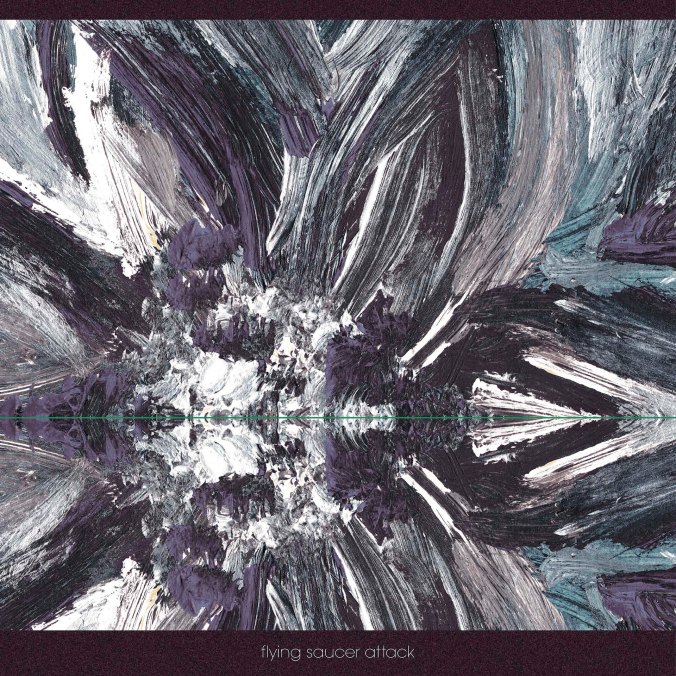 Suddenly Flying Saucer Attack appears again, nearly 15 years after last contact, with a set of unnamed instrumentals. It’s gorgeous, droning guitar music that makes no apologies for its obliqueness and doesn’t try to reach out to the uninitiated.

This slab of ashen dream is ready and waiting for anyone interested.

If you’re of a certain disposition, you’ll fall into this sound immediately. Waves of gentle feedback wash over, and echoes that open up like a giant’s maw swallow you whole. It’s often formless, but never vaporous. There’s a weight and drive behind this music. It could soundtrack an apocalyptic Western or a gallery of Dali paintings. I will definitely color your dreams.

It seems amazing to think that David Pearce (the sole remaining member after Rachel Brook left sometime in the 90s) could have kept this project so under the radar, releasing it into the void of 2015 without warning or fanfare. The guy has virtually zero online presence, but judging by talks with friends and other fanatics around the world, there was an unspoken thirst for this kind of guitar mastery.

FSA mysteriously erupted again at the perfect moment, then. With zero warning, this vaguely titled album has begun making its way around the world and touching people based purely on word of mouth. Despite its focused dedication to drifting sounds and little to no sense of melody, it’s achingly beautiful and sensual. It proves that Pearce has a lot to offer the world, well over two decades since releasing his masterpiece album Further. I’m just hoping that this is the opening shot, a prelude to bigger things. The man who invented rural psychedelia is back, and I’m hungry for more, all over again.

Instrumental 7 (which seems to have the prior track tacked onto the front) is a fantastic sprawl at the heart of the album. I love how the ringing drone slowly gives way to a muted but glowing melodic phrase; it feels like emerging from underwater. I shared it because of the dark slideshow video, which helps set the tone visually, before the music overwhelms.

My favorite song, however, is the final track, Instrumental 15. It feels like a volcano erupting in slow motion, glaciers of molten earth sailing gently through the air. There’s danger and heat lurking within the delicate arcs of fire. The guitar is rarely used to such expressive and lyrical effect these days. We’re so lucky that Pearce has begun recording again.

You can buy the album directly from the band here. I’m going for the vinyl of course, because just look at that cover art.