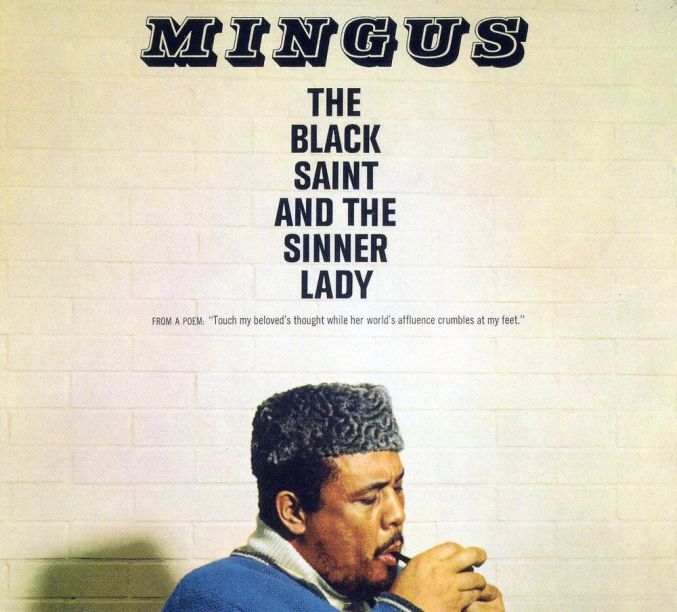 Charles Mingus is an absolute deity of 20th century jazz…

…and this album proves it beyond any doubt. One of the towering achievements in modern music, this is perhaps my favorite jazz album, and certainly one of the most wildly ambitious, mold-breaking pieces of music recorded in the 20th century. Not only is the music here spasmodically orgasmic, scaling heretofore unheard-of heights with reckless abandon; it’s mind-warpingly catchy, telepathically moving hips and nodding heads. The crescendo swells practically cry out for hands raised in ecstasy.

I could – and have – listened to Black Saint and the Sinner Lady several times in a row and could not possibly tire of it. I’ve listened dozens of times over the years. I love all of Mingus’ work, but this suite in particular seems to have struck some vein of godlike power, conjured through the four movements presented here as “dance” pieces.

Building organically from the first short Solo Dancer movement through the final blasted frenzy of Trio and Group Dancers, each additional layer is a natural evolution on the basic theme. Expanding, soaring, dipping, roaring, and simply freaking out, Mingus never relaxes his kung fu grip on the proceedings. Covering so much ground in such a tightly wound coil would be impossible for most musicians, but the group assembled here sets off the aural fireworks like they’re genetically engineered to do so. The virtuosity on display here simply must be heard, over and over again, to fully grasp.

Feeling it? Mingus hoped so.

“I wrote the music for dancing and listening. It is true music with much and many of my meanings. It is my living epitaph from birth til the day I first heard of Bird and Diz. Now it is me again. This music is only one little wave of styles and waves of little ideas my mind has encompassed through living in a society that calls itself sane, as long as you’re not behind iron bars where there at least one can’t be half as crazy as in most of the ventures our leaders take upon themselves to do and think for us, even to the day we should be blown up to preserve their idea of how life should be. Crazy? They’d never get out of the observation ward at Bellevue…” These are his original liner notes from the album.

Obtain your soon to be treasured copy of this landmark on vinyl or CD at Discogs or even Amazon.