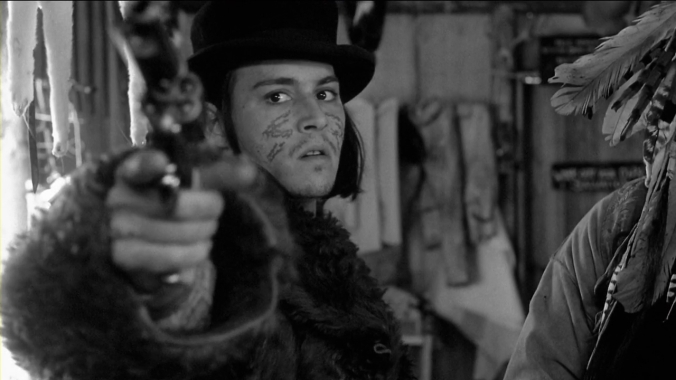 “Do you know how to use this weapon?” – Nobody

Neil Young’s score for the 1995 Jim Jarmusch film Dead Man is hauntingly evocative, an improvised set made with electric and acoustic guitar, organ, and piano, recorded as Young watched rough cuts of the film over just three days.

Vibrant, endless, searching, guiding, and inspiring – Young’s guitar tones ripple through the fields, cover the mountains, and scour the lakes with their pure holy roller tones. This music feels like the declaration of some unspoken presence, a force buried underground, echoing from caverns and crevices, rising up to paint the clouds on occasion, then dissipate over the coast into the roiling sea.

The only frame of reference for this album, aside the film itself, is perhaps the album Hex: Or Printing in the Infernal Method, by drone pioneers Earth. The title of that album, in fact, comes from a certain William Blake poem taken from the film and embedded in this album.

The ancient tradition that the world will be consumed in fire at the end of 6,000 years years is true, as I’ve heard in hell. The whole creation will be consumed, and appear infinite, and holy, where as it now appears finite and corrupt. This will come to pass by an improvement of sensual enjoyment. But the first notion that man has a body distinct from his soul is to be expunged; this I will do, by printing in the infernal method, by corrosives, which in hell are salutary and medicinal, melting apparent surfaces away and displaying the infinite which was hid. If the doors of perception were cleansed, everything would appear to man as it is, infinite. For man has closed himself up, till he sees all things through narrow chinks in his cavern. – William Blake, The Marriage of Heaven and Hell

This is important to understanding the texture and aim of the music. Powerful, roaring guitar tones veer into ragged feedback with a rumbling low end. The album is a canvas painted mostly with one simple but brilliantly wielded brush, Young’s guitar. Its warmth carries a nighttime-in-the-woods ceremonial fervor, coloring the edges like burnt paper. Hints of funereal organ pulse and delicate piano stabs dot the landscape.

The full work comes crashing together via the epic centerpiece Guitar Solo 5, a 15 minute exploration meant to drag the listener far above the earth into the embryonic spray where stars are born and alchemy is real.

Listen to it all if you’re feeling brave.

While experience with the film is helpful, it’s in no way essential to enjoying this record.  Simply hit play and let the wild horse run free. In time, you’ll be ready for your own journey. You’ll want to see the movie anyway, which is a slow motion delight of culturally violent poetry.