23 Skidoo were born skirting the fringes of post punk, industrial, funk and dub, a nearly peerless realm infrequently visited by A Certain Ratio, Throbbing Gristle, and This Heat.  Twisting these genre elements through a strangely appealing recombination act was just the beginning of what the band means; it’s a coldly academic observation neglecting the warmly aggressive, primal energy bursting through the sonic capillaries of every piece they wrought.  Honestly, the only act I could consider a true musical neighbor are the willfully radical legends The Pop Group.  This is a remarkably good thing. 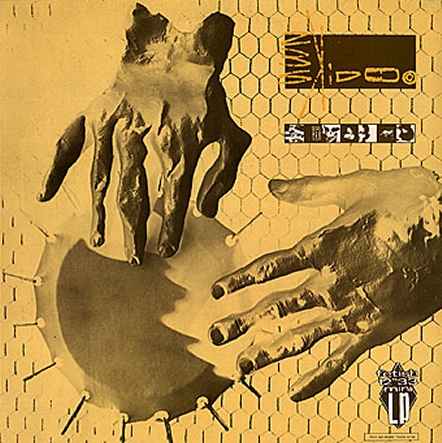 First of all, Seven Songs is 8 tracks long.  That’s the first clue about the contents of this enigmatic, quintessential release – like The Pop Group, their modus operandi was grounded in subverting expectations and twisting them into something altogether surprising, thrilling, and a little bit scary.  The limitless ingenuity spread across these 32 minutes constantly pulls the rug out from under the listener, encouraging fleet feet and an open mind.  Unexpectedness, in this case, means welcome change and otherworldly juxtapositions, with the comfort of a trail guide who – despite a melange of insanity – knows exactly where he’s taking us.

Articulated noise pulls straight into a gutteral dub beat and tribal percussion stabs while the band cuts in and out with all manner of wordless vocal bursts and sheets of guitar noise on first cut Kundalini, laying the foundation for a record every bit as catchy as it is obtuse.  Next off we’re treated to a skittering drum kit and funkadelic guitar, touchstones of Sly & Robbie infused dub, and one of the most ‘conventional’ moments of the album before dropping through the trumpet accented drone abyss of Mary’s Operation, leading directly into the asterix of a track 4, Lock Groove, which is aptly titled as anything here.  This is also the reason the album is appropriately named – 30 seconds of oscillations do not make a song, thus “7” is indeed correct.  But I digress.

Picking up the scattered shards and welding them into a lumbering prehistorical Transformer, New Testament proceeds to stride right into the path of album highlight IY.  Kicking off with energetic, get-up-and-dance (or kick ass) percussion and a swaggering muted horn, it’s equally ready-made for epileptic dance fits and barnstorming runs over decaying industrial districts.  Building through a propulsive rhythm motorcade to a fevered crescendo, the track sweats out all the clap-happy energy – leaving the album in a whirlpool of dread and ennui.  Amping up the atmosphere beyond smoke-machine-and-lights-out darkness, Porno Base nearly defines the word cavernous and sets the stage for quirky closer Quiet Pillage.  All cricket-squeak guiro and steel drum swarm, the track gradually shifts toward a subdued ambient pulse and wood flute accents before dissipating entirely, like waking from a disturbing, curiously addictive dream.