David Lynch is a 100% certifiable mad genius.  This is statement of fact, not opinion.  From film to music to writing to, well, reporting the weather,  he’s a transcendental force to be rockoned with.  In addition to having impeccable visual sense, an ear for ethereal storytelling, and the golden touch of endearingly profound weirdness, the man has unfathomably great taste in music.  To that end, he recruited David Jaurequi and several session players to record the music for his seminal Twin Peaks film, Fire Walk With Me.  Under the name Fox Bat Strategy, they appeared in the Pink Room and Blue Frank scenes, and also recorded this set of tunes written by Lynch… and promptly disappeared for years. 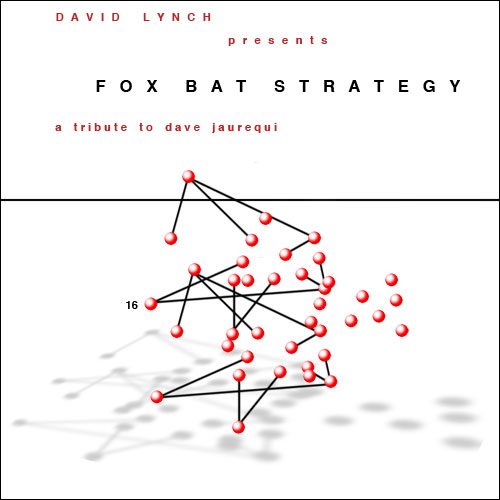 Upon Jaurequi’s death in 2006, Lynch decided to summon this shelved collection of haunting pop apparitions toward the light of day.  It took him three years, but thank god he did at all.  These seven tunes are beyond cool – the perfect crystallization of the alluring idea of his film work translated into a darkly romantic album.

Fox Bat Strategy is pretty much what a David Lynch fan would expect based on experience with his unique oeuvre.  Sweetly menacing, reverb-laden old school bluesy rock sounds with a hint of pitch-black midnight surf guitar.  Lyrics written by the man himself straddle the line between Roy Orbison– or Ricky Nelson-style saccharine love ballads and the unnerving prose laid out in the dreamier sequences of Blue Velvet, Mulholland Dr. or Twin Peaks itself.  It’s too bad this is the only release we’ll ever hear; we can take comfort in the fact that there are at least a solid 40 minutes of smokey majesty to savor, again and again.

[please take the golden opportunity to purchase this via amazon or Mr. Lynch himself]