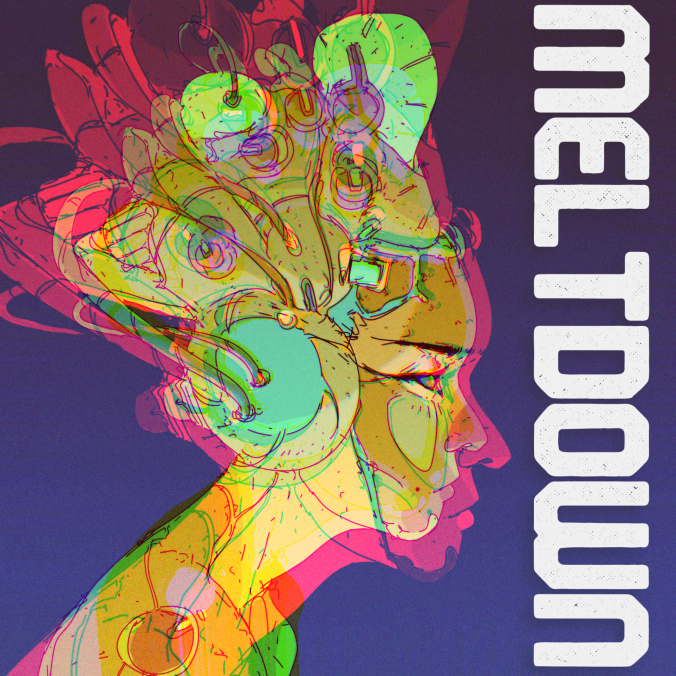 Meltdown may come as a surprise to a lot of listeners. It’s not ambient, it’s not techno, it’s not modern, and it’s not really all that cosmic. But this set of disco-funk-electro-synth floor stompers has a lot in common with the type of music typically shared here. The relentless dance pulse, the future-synth textures, and the lonely nighttime neon vibes are all here. And like all great music, it is deeply psychedelic.

Because a large part of my musical heart belongs to house music and its endless permutations, I always wanted to explore some of the genre’s roots in a mixtape. Especially because it’s long since become sort of synonymous with a white, European audience, I wanted to emphasize the distinctly black and queer origins of the sound. That doesn’t mean there are no white folks in this set; some of the funkiest musicians to play were caucasian as can be. It just means that my ears were focused most directly on the space where disco and funk met Hi-NRG and synth pop, where artists of color were pushing music production forward in a way that the wider world wasn’t always ready for. The tracks here, for my money, feel utterly fresh while undeniably evoking their era: the years surrounding 1982, when I was born.

The unifying threads for Meltdown are simple: synthesizers, rhythm, and of course genuine funkiness. Having these unspoken ideals in mind while searching my collection and asking for suggestions on twitter, I ended up with a vast collection of tracks spanning well beyond all the genres listed above. I parred things down to just over an hour, but I couldn’t narrow the stylistic spectrum. I call this my funk mix, but I admit that it tramples all over traditional definitions of funk. Every track here moves with the soul of funk, even if it boogies well outside the borders.

Speaking of loose definitions, this mixtape kicks off with the latest song I discovered, a short synth-blasted instrumental by Chasman called “Wind Fall.” It came to me courtesy of the Numero Group label’s reissue of the artist’s one and only release, so I’ll let their page speak for itself: “With just a DW-8000 to keep him company, University City’s loneliest cyborg issued this eight song electro-funk statement in 1989. Spectral synths, pulsating programming, and yes—a keytar—set the soundtrack to your next game of Spyhunter.” The perfect segue into bouncing boogie bliss of Take Three’s “Tonite’s The Night (All Right),” right? This is a track I know virtually nothing about, but Dam-Funk put me onto it with his DJ-Kicks release a few years back and I’ve wanted to share it ever since. It’s simply transcendent dance music, with a spaced out hand drum solo in the middle, wrapped in gauzy female vocals. I could live in this tune.

Because these kind of beatific beat monsters with female vocalists are very much my kind of things, I had to drop “In My House” by Mary Jane Girls next. This 12″ cut is the superior groove machine compared with its album and single siblings, all ceaseless enthusiasm and full throttle bounce. I first got into this Rick James-produced group in 2002 while playing Grand Theft Auto: Vice City. If you’re anywhere near my age, you probably also remember hearing “All Night Long” while driving the streets of the virtual eighties and blasting the second-best radio station in the game, Fever 105.

Next we dip into moodier streets with Tony Palkovic, who has probably the craziest yet sparsest website of anyone I’ve ever linked on here. I can thank that same DJ Kicks set for introducing me to Palkovic, although it was his entire Born With Desire album that I fell into, especially the track “Breath of Sound.” In some ways it feels like the most modern – or at least out of time – track in this mix. I don’t know how to describe it, but I know it helps connect everything else here.

Kleeer probably emphasize the evolution of funk from its organic, live sweat and blood roots to its sleek, synthesized, and starbound future more than anyone else here. Their track “Tonight” oozes dystopian love, feelings lost in the wires of communication through an endless nighttime sprawl. The low vocodered vocals sound like the ghost of synth funk crying out from behind the internet  and I love them more than I can say. This temporal displacement fits perfectly with followup “One Hot Afternoon” by Patrick Cowley, a piece recorded in 1982 at the very latest – the year Cowley died from AIDS complications – but never released until 2017. While he worked behind the scenes on synths with disco megastar Sylvester, his own music wasn’t truly appreciated during his lifetime. This is an utter shame, as the electro flavored track has one of the best basslines of any funk instrumental I’ve ever heard. Luckily, San Francisco based obscure-reissue label Dark Entries has resurrected interest in his work. Really, we’re all lucky to be living and listening in a time when reissue labels are bringing so much incredible, incredibly buried greatness to light and to our ears.

This set may sprawl in multiple directions but its core is composed is the deeply funky combo of Prince Charles and the City Beat Band’s “Cash (Cash Money)” and Gina X Performance’s “Kaddish.” Prince Charles Alexander recorded three albums with this band and the Lyricon wind synthesizer in the early 1980s but later found massive success behind the boards; as an audio engineer and producer he recorded tracks for Puff Daddy, Usher, Boyz II Men, Jodeci, Brandy, Babyface, and even Sting. Today, he’s a professor of music production and engineering at Berklee College of Music in Boston. Having that pedigree in mind helps explain how a song with such simple, gut-punch appeal has so much to explore when listened with serious attention. The beat here is the absolute heart of boogie funk, its pull so strong that I immediately started building a mix around it. Its warm, hungry, dazed optimism is flipped on its head for the followup track. “Kaddish” simmers in a funereal, faintly dystopian mood, courtesy of its juxtaposition of lyrics about the traditional Jewish prayer following death – called a Kaddish – with cyberpunk synths anchored to a robot funk bounce.

With that neon-glow, night city vibe introduced, the mix moves on with a brief ambient piece from Greek new age pioneer Iasos. Like many genre pieces I’ve included in mixtapes over the past few years, this early track is far more alien and engaging than the cheesiness typically associated with new age from pretty much the 1990s onward. If you want to see an image of what most people picture when they hear “new age,” DO NOT miss his exquisitely geocities-esque website. For someone who hit puberty around the time the internet looked like this, it’s weirdly comforting and beautiful to behold.

Next, we leap far into the future for a 2016 track by Chicago deep house legend Ron Trent that fits seamlessly with everything that comes before it, seemingly time traveled three decades, only hinting at its modern construction. I can’t really say much more than this: the song is eight minutes of pure boogie funk bliss, and I’ve looped it more times than I can count. I’m just happy I found a  perfect place to put it. Before we reach the next dancefloor peak, the mix zooms through space with a track from the self titled International Music System album. It’s all electro warp and Italo-disco thump, genre constellations meshing perfectly with synth funk when the stars line up like this, where distinct musical lines dissolve with the gravity of the beat.

Speaking of the beat, Shirley Lites keeps the bpm flowing with her masterpiece of a dance track, “Heat You Up (Melt You Down).” This is another stone cold 12″ classic, on the legendary West End Records. There’s a moment in this song, around 4:25 in, where the inter-dimensional vocals fall away and a synth drone swells and the machine gun rhythm doubles up into pure ecstatic bliss. I swear, I could be dead and this song would make me shoulder shrug right up out of the coffin. It might be one of the greatest dance tracks ever recorded, taking that Hi-NRG arpeggiation from Donna Summer and Giorgio Moroder’s “I Feel Love” to the next level. While she only dropped a handful of singles in the early 1980s, Shirley is still going strong as a live performer, which is fantastic to know. Because nothing could top this atmospheric peak, I dropped in a short mood piece next. Dam-Funk makes an actual appearance here on the only other track from modern times under his Garrett project. Noodly ambience with an undeniable funk sheen, it sets the stage for the final and longest piece of the mixtape.

Cloud One was a complete mystery to me before embarking on this project. When I solicited my friends’ picks for favorite funk epics, I got a lot of great suggestions – but I found nothing quite on the level of The Bar-Kays’ “Holy Ghost” (which, if you haven’t heard that, play it now and feel your body explode). Then while browsing some related artists I bumped into this project, a name that sounded more vaporwave than boogie funk. Turns out, it was the solo vehicle for production wizard Patrick Adams, mostly known for his work on New York labels like Salsoul, P&P, Prelude, and even Atlantic. And it shows. For such a raucous, unstoppable funk train, there’s an incredible amount of detail, subtle change, and weird little twists that make it equally great for headphone listening as for club freakouts. “Atmosphere Strut” is impossibly groovy, impeccably named, irresistible music.

And that’s that. This is my take on a very specific era of sound that echoes perfectly today.

About the cover art: it’s based on a piece called “i do not want to talk again” by Tano Bonfanti, an Argentinian concept artist and character designer who has worked in video and board games. Appropriately, I came upon his work via Kotaku fine arts post earlier this year, and immediately fell in love. His style and coloring instantly evoked memories of Moebius, perhaps my favorite comics illustrator of all time. (You may have noticed Moebius’ work appear on the covers of prior mixtapes Until the End of the World and ZONE – I’m a huge nerd for anything he’s done.) Although Bonfanti’s at-a-glance similarity to one of my heroes got me interested, it was his more radically realized imagery that made me a big fan. His portfolio shows off a vast array of coloring, detail, and wild imagination that I had to share with the world. Psychedelic science fiction vibes are all over the place – exactly my kind of thing. If you’re here reading this, it might be your kind of thing too. Don’t miss the art prints available to hang on your wall if you’re feeling his work too. Also, his instagram is a really nice account to follow and brighten up your feed.

Each track is listed with the year it was made and linked to the album or single where the song was sourced, for ease of exploration. Here’s the full track list: