Fela Kuti is a supernatural being.  An extraterrestrial.  A god.  A politically charged, female-fueled rhythm machine.  He basically invented what we know as afrobeat.  He challenged the deadly authority of Nigeria’s oppressive government through song and action, and paid a price for it.  He popularized and reinvented jazz in Africa, then brought the explosive results to the West.  He was a visionary, a revolutionary, a womanizer, a pioneer, a king… a bad ass mother fucker. 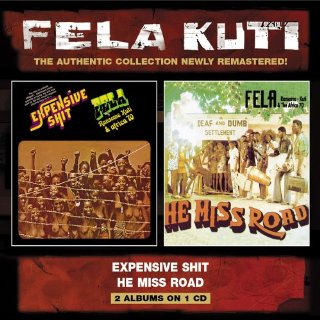 Most of his music was released in single and 12″ form, and the majority of his tracks were 10+ minute floor pounding epics.  Thus when being reissued, most of the originals were combined on CD, with it’s longer running time; which brings me to Expensive Shit + He Miss Road.  The impossible nature of selecting a favorite Kuti track or album led me to sharing, as an introduction, the release which I simply have listened to most often.  The tracks here are simply some of the most addictive numbers in his catalogue.  Aside from the two title tracks, we have Water No Get Enemy, Monday Morning in Lagos, and It’s No Possible – all long form, mercilessly energetic pieces designed to kickstart brains and shake asses at the same time.  Most Kuti songs follow a formula of intense rhythm buildup, chanted or sung culturally incisive lyrics, a beat explosion, and an extended hypnotic ending.  The sound itself begs no description; it just is.  Those who have listened know; those who have not are missing out on some fiercely energetic hip-shaking deep groove jams.  The stories behind the songs’ genesis are often intriguing enough for a small book, Expensive Shit in particular, so be sure to read up on them.  It not only aids in the enjoyment of the tracks (as if these masterpieces needed help to be enjoyed) but provides some insight into the man and his tumultuous life.

Just give this a try, especially if you’re completely new to it – in such a case, I promise no less than the most interesting thing you’ve heard all week/month/year.  Open your ears and prepare for spastic motion, mental and physical.  This is only the beginning.