20. Félicia Atkinson – The Flower and the Vessel 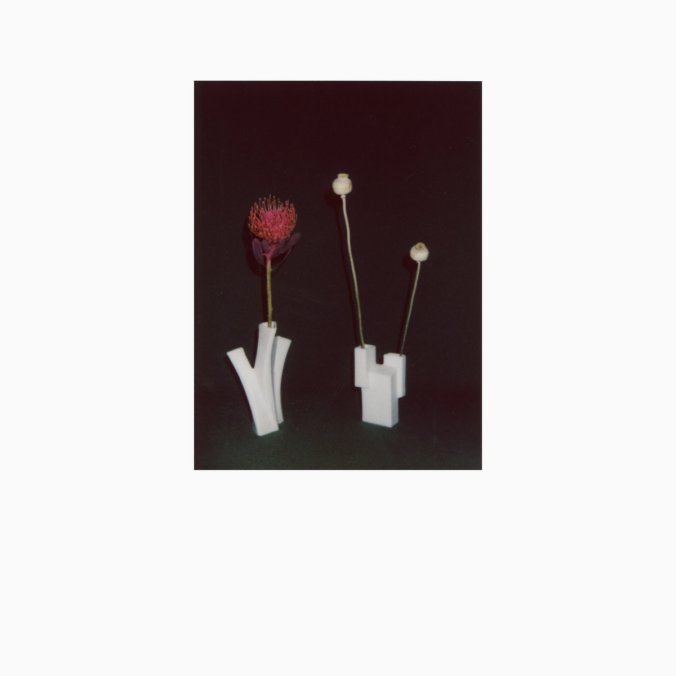 I’m not even going to try to adequately describe this music. Félicia Atkinson has returned with an album more grand, more personal, and more incredibly detailed than last year’s best of 2018 Coyotes. I’ve probably listened a dozen times and I still can’t find words to wrap around this elegant, experimental, endlessly beautiful experience. So I’m just gonna share maybe my favorite bit of description from the album’s Bandcamp page:

The Flower & The Vessel ventures farther into silence, absence, and voiceless wilderness. Among her sources of inspiration were “women who wonder, dream, and create vacant spaces in their art,” as well as Ikebana flower arrangements, which reflect her own relationship with listening: “structure combined with everyday noises, selecting them to make a sparse music bouquet.” Field recordings from Tasmania and the Mojave Desert murmur beneath hushed reverberations of gong, vibraphone, marimba, softly processed into an elegant emptiness, alternately eerie and serene.

That’s really all you need to know. 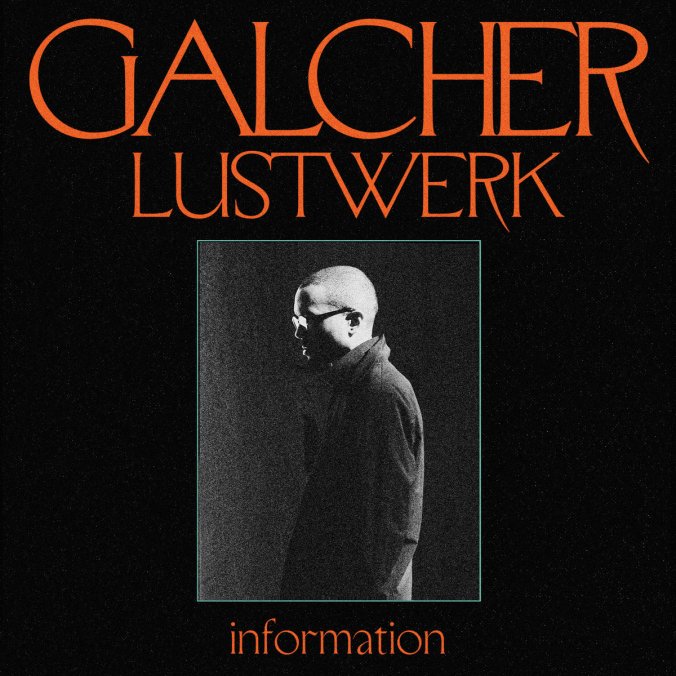 While last year’s 200% Galcher (a best of 2018 album of course) had more straightforward bangers, with some luxuriously extended dance floor fillers spread across its lengthy run-time, this followup is a far better, far more carefully shaped album experience. The flow is endless, the production is polished and detailed as anything you’ll hear this year, and the atmosphere is positively lush. His signature “hip-house” vocals dance atop a continuous flow of beat waves, all crested with snappy drums and colored in with velvety synth tones, live jazz instrumentation frothing up throughout the mix. This might be the most sumptuous production I’ve heard in 2019, as rich as anyone in deep house could ever hope for. The only downside is that some of the songs end too soon – but I suppose wanting more of an album is a good problem to have.

It’s been five years since Flying Lotus dropped his masterpiece You’re Dead, one of the best albums of 2014. One of the only faults I could find on that record was that some of its best moments were cut short – or at least, I wished they could have gone on much longer. He could ride a crest of energy like few artists I’d heard before, whipping me into a frenzy like Aphex Twin or Can or even Gang Gang Dance, live at a tiny venue in New York where I danced more than I’ve ever done in my life (they really are phenomenal and deeply weird in person). His own live sets are some of the most unpredictable, freewheeling experiences I’ve had at a show. And so, although this album basically seems to amplify everything he did right on the last one, it just doesn’t quite reach the same heights. It’s nearly twice the length, an overload of everything Flying Lotus does best, and often like no one else. Every track is full of jaw-dropping musicianship from the man himself on keys and his usual Brainfeeder accomplices, including second-time MVP Thundercat on bass. Nearly every minute of it is a kaleidoscopic wonder, shapeshifting jazz and techno and hip-hop and film scores and video games and David Lynch himself – but it doesn’t cohere quite as well as You’re Dead. And yet this is still easily one of the best releases of 2019. I’ve got a lot of affection for this guy, so I guess I felt like explaining why this wasn’t ranked as high as his last release. But I mean, everything on this list is highly recommended so I’ll just stop here. Dig this weird video with Lynch himself. 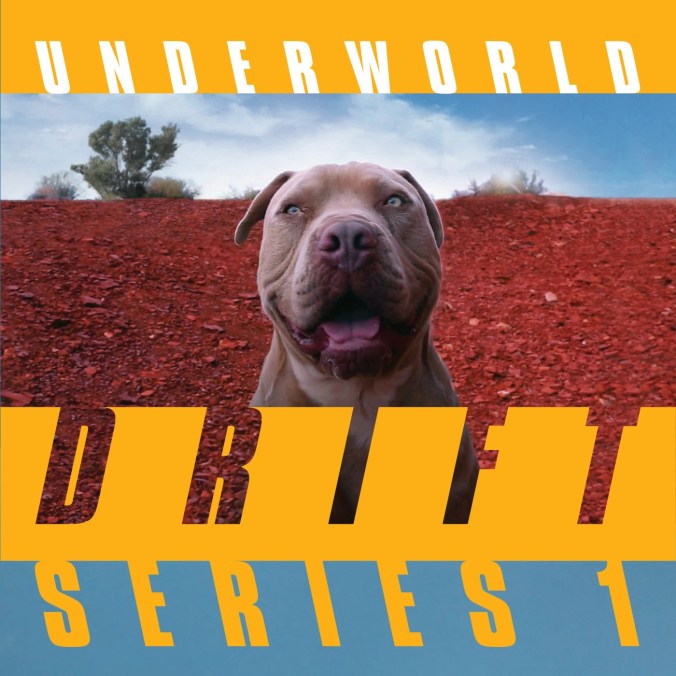 Underworld were one of the first electronic acts I ever latched onto, growing up in the cultural isolation of the American midwest. Sure, I was born in the same state as techno and lived only a few hours from the home of house music, but in my little Lake Michigan city, electronic music was something I’d only hear in movies. One of the most important movies of my life, thanks to its soundtrack, was Hackers (1995). This film introduced thirteen year old me to Leftfield, Massive Attack, Carl Cox, and most of all Underworld, with their still-transcendent dance epic “Cowgirl.” I became a lifelong fan. But nothing would have prepared me for the fact that 2019 was their most productive, and one of their most incredible artistic years ever. The Drift series was a selection of five album-length releases over the course fifty two weeks, exploring every single corner of their expansive sound and then rocketing off into entirely new realms that still sounded unmistakably “Underworld.” They went ambient-r&b, space techno, minimal electro, deep house, and in the most welcome shift, far out into knotty, jazzy krautrock in several lengthy collaboration tracks with Australian hypno-jazz legends The Necks.  I almost picked 47 minute motorik epic “Appleshine Continuum” for this list, but decided that the entire massive album deserves it. This is my favorite piece out of the half dozen hours, but it’s just one of many stratospheric peaks. Unbelievable creativity and drive for a project that’s been around for more than three decades. 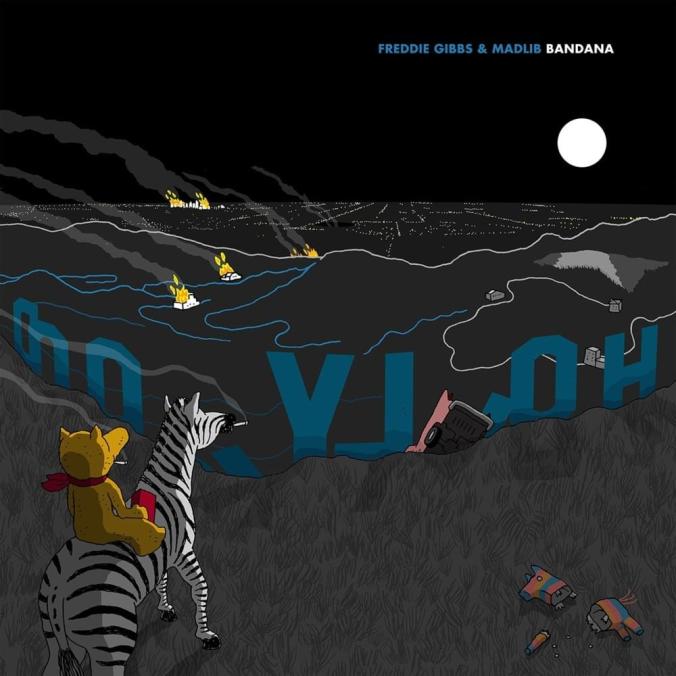 Somehow, some way, Freddie Gibbs just keeps getting better. And Madlib? It’s harder to tell with his vast discography spanning multiple genres from Brazilian jazz to hip-hop to pseudo foreign film soundtracks to a reworking of the Blue Note catalog, but I’d hazard a guess that this is his slickest, most nuanced rap production yet. Sure, it’s not as flashy and sampledelic as the legendary Madvillain album, where he partnered with MF Doom for a cartoon-infused explosion of super villains and free associative wordplay. But it’s far more holistic, unified, focused; this is the work of a veteran duo who know each others’ strengths inside and out. The vinyl crackled futuristic flow is the perfect delivery vehicle for Gibbs’ world weary, soul-damaged coke rap. Freddie’s lyrical dexterity seems to be stepping up even further – polished, rapid fire delivery ninja flipping delicately over complex yet effortless-sounding rhymes across the entire set. Occasional guests like Anderson .Paak, Pusha T, and Killer Mike add a few new wrinkles and some vocal variety, but the show still belongs to the main duo. Bandana is easily as good as their last collaboration, best of 2014 album Piñata, and just might be even better. 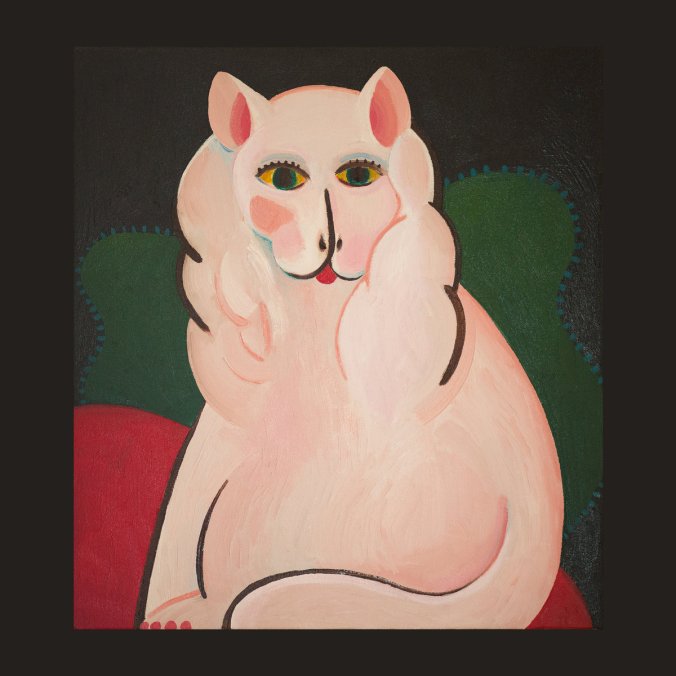 This year, my top listened genre of music was “fourth world” and although the vast majority of that music – from Jon Hassell to Gigi Masin to Erik Wøllo to Laraaji to all the great ECM next-level jazz from the mid 70s to the mid 80s – came from long ago, a growing portion of it was being produced now. Joseph Shabason kind of personifies what I love in a modern take on this sound: he makes it wholly his own in a way that couldn’t have been done all those years ago when the distinct sound emerged. He also does things with the saxophone that make me badly wish I kept up with the instrument myself after school. I’ve still got it tucked in the basement, ready to be tuned and played. But I think I’ll just listen to this indescribable mixture of beauty and weirdness and autobiographical longing a few more times. I was so inspired by the lead single “1517” in fact that I started building the Vertigo of Time mixtape around it. 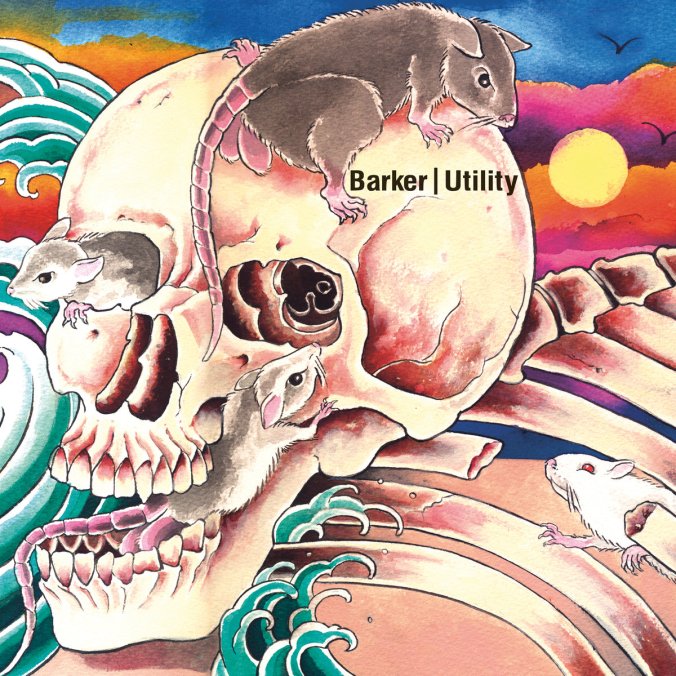 Barker first piqued my interest with last year’s Debiasing EP, bringing a rich, textured, and melodically colorful presence to heady techno, my musical bread and butter. But it didn’t prepare me for the narrative sweep, the conceptual flow, the grand ambition of this debut full length. With Utility, Sam Barker trades more overtly dance oriented tracks for atmosphere, dream logic, and structural nuance. This is the Big Techno Debut as a novel, a sound story to fall into and get all wrapped up inside. It all builds to a final track that’s as much weirdo future jazz as it is anything you’d expect from early morning hours in a darkened club in Detroit or Berlin. So deeply compelling I had to drop it in the recent Hypersleep mixtape. 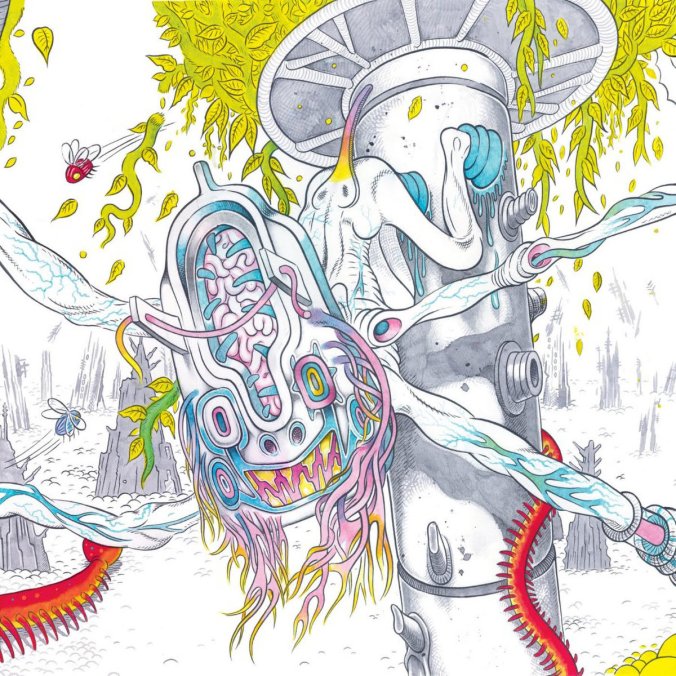 Sure there’s a new name, but this could have simply been released as the next Shackleton album and no one would have blinked. Is that a bad thing? Absolutely not. Sam Shackleton makes some of the most distinctive music today, instantly identifiable within a few seconds’ listen, doing something huge and wild and a little dangerous – something that nobody else in music is even attempting. His polyrhythmic, shamanistic, out-of-body beat explorations long ago evolved into a grand mutant light-years away from his dark dubstep origins, giving us masterpieces like the apocalyptic hour-long suite Music For The Quiet Hour and (best of 2017) otherworldly phantom party Sferic Ghost Transmits. This time, he picks up with the players who helped craft his last couple releases and forms a real band – the more-official addition of vocalist Heather Leigh, keyboardist Takumi Motokawa, and mallet player Raphael Meinhart helps him craft his loosest, lightest, and most warmly seductive album yet. 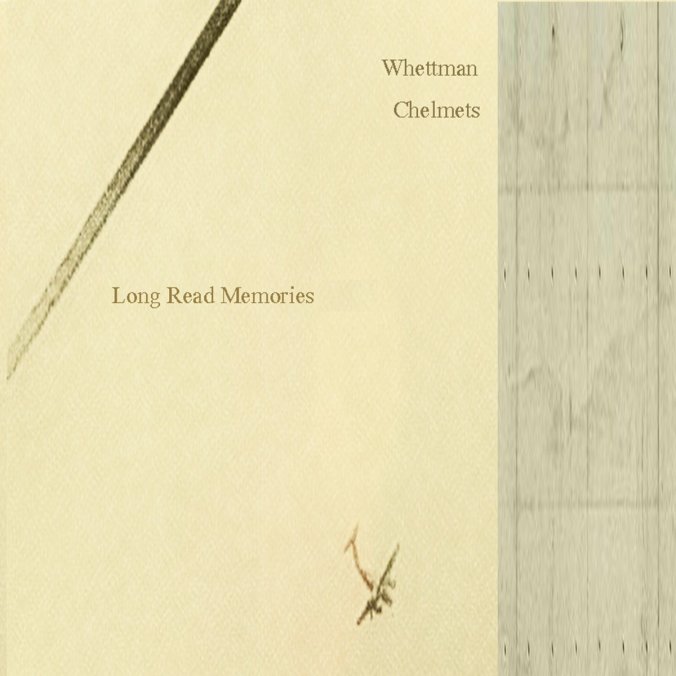 My brother was arrested for murder in 1987. He was 17. I was 9. It was a singular event that triggered so many concentric circles of pain around so many people. He has grown. He is almost 50 now. He has facilitated the healing and dialogue of victims of crime with offenders. He is a Buddhist. He is still a juvenile life without parole offender, regardless of US Supreme Court rulings to the unconstitutionality of this sentence without consideration of age. We talk on Saturdays. We write. We share music and shows we are watching. I enjoy these talks.

So goes the release page for the Long Read Memories. The backstory is important for informing the deep well of pain behind the music here, but it isn’t required to feel that pain, that life half-lived, the full weight and power of the album. I have so much to say about this breathtaking, tender listening experience, and much of it would be a retread of my review on I Heart Noise, so I’ll just paste the final paragraph below. In the meantime, peep that short review and press play on the Bandcamp box below. This may be the most radically new sounding album on the entire list.

“Despite the heavy construction, Long Read Memories is a remarkably enjoyable listen from beginning to end. The palpable, raw emotion blends perfectly with sumptuous production, fluid and endlessly detailed. It’s not exactly lighthearted or fun, but it’s the kind of music I find myself leaning in ever closer to get more of it, to feel it closer, to know it a little bit better. Its pleasures may only unfold upon the second or third time around, but it becomes more worth it with every loop. Above all, it is a deeply rewarding listening experience.” – me 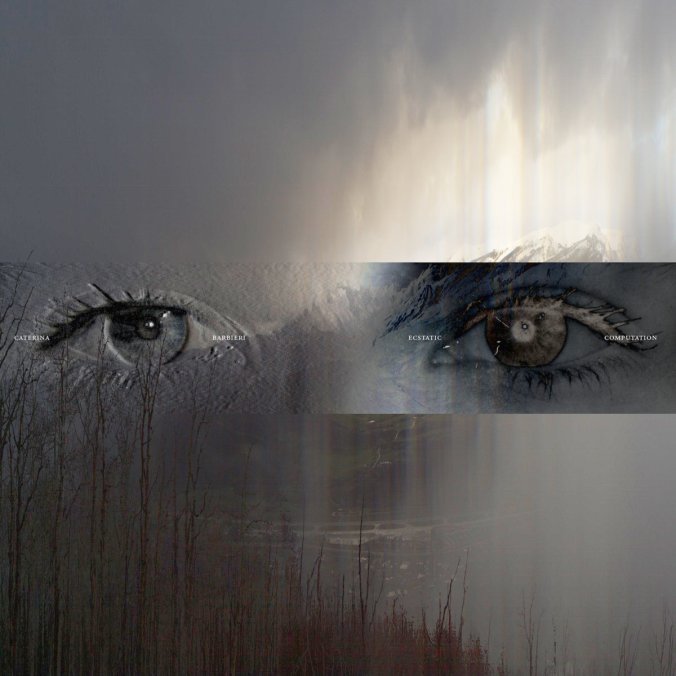 Ever since her 2017 debut, Patterns of Consciousness, Italian composer Caterina Barbieri has been making some of my favorite synth sounds in the world. But she didn’t build anything this staggering in scope and structure and sheer songcraft before Ecstatic Computation. Her laser sharp tones and hypermathematical sequences zap directly into the pleasure center of my brain, burrowing into the intersection of mystical space nostalgia and Gibsonian cyber tragedy. Looking back over her brief, three album run so far, a composition this assured, tightly sculpted, and unabashedly ambitious seems inevitable. I can’t wait to hear what she does next.