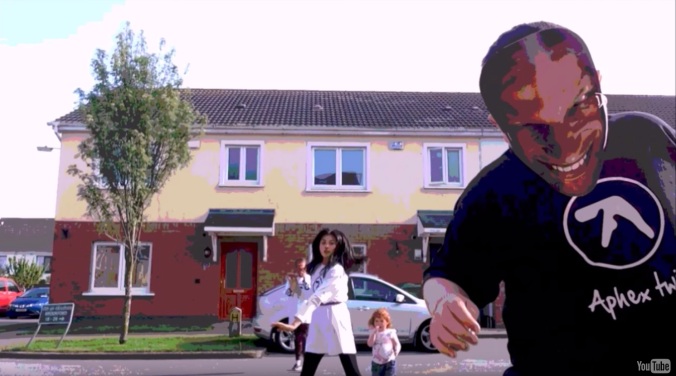 Aphex Twin has released the first single off his upcoming Cheetah EP and it’s… well it’s fantastic. This is par for the course, considering the high quality of work he’s been dropping since returning to the world in 2014 with the monumental Syro.

The video is a whole new experience for fans, though. Watch the weirdly psychedelic clip here:

You can also listen to CIRKLON3 streaming on Spotify.

How does it sound to me? To put it stupidly simple, it’s an Aphex Twin song, trading in warm acid bounce and tense synth pads for over 8 minutes of loose, relatively straightforward fun. There are no drum freakouts or squelching noise tantrums; instead the lengthy runtime gives it ample opportunity to really breathe, space out its elements, and tumble into a handful of melodic detours.

While the song is nothing really new from the man known in real life as Richard D. James, it’s still a top quality offering in line with his most accessible work. The video, though, is a whole new story.

The video utilizes every camera effect a modern smartphone has to offer, creating a dizzyingly off-kilter playground for the stars – children wearing Aphex Twin shirts – to romp in.

It’s like the dad-world reflection of his often terrifying music videos from the 90s, where RJD’s visage would morph onto unsuspecting men, women, and mutants alike. Instead of a shrieking nightmare, this clip is a candy coated daydream of saturated childhood shenanigans.

It’s also the first official music video of Aphex Twin music since 1999’s weirdo epic Windowlicker. The whole thing was filmed in Dublin, Ireland by 12 year old Ryan Wyer, a prolific gaming Youtuber, using his friends and family as stars. It’s about as low-key as a major music video could be, painting a wonderful contrast to the avant garde productions of the past.

The Cheetah EP is coming July 8, 2016. In a first for Aphex Twin, it’ll be released on cassette, in addition to CD, vinyl, and digital editions. If the best of 2014 album Syro is anything to go by, this is going to be another must-have release.

While you probably already hit play on the video above, I can’t urge you enough to check out www.cheetah-ep.com to see the incredible design work. The video itself floats on a cube that can be rotated while still playing, showing off the album artwork on a different side. Each time the cube is rotated, the background changes too. It’s the kind of playful touch that’s always elevated James’ output above other mere mortals.