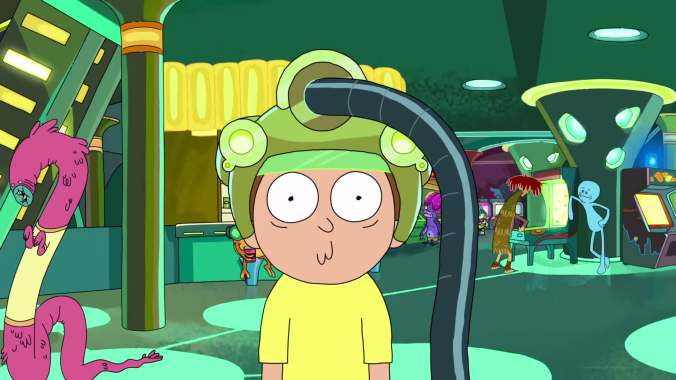 I’m not normally that interested in mashup videos, but this one combines one of my favorite musicians with one of the best shows on TV in expert fashion. It’s Rick and Morty synced up to Kendrick Lamar‘s breakthrough single, Swimming Pools (Drank).

Watch below. It’s kind of incredible.

Regular readers already know how much I adore Kendrick Lamar from the many, many times I’ve written about him, but I haven’t yet mentioned Rick and Morty. It is, in my humble opinion, the most wildly creative show on TV right now. At first, it reminded me of an adventurous combination of Doctor Who and Futurama, mixing the heady surprise of the former with the layered, character-driven humor of the latter. But it quickly became so much more than that.

The show is absolutely bursting with fantastical sci-fi ideas and plots that pull the rug out from under you. Every frame is filled with microscopic details that make it a visual feast and a long-form puzzle, begging for multiple viewings. It’s clever, abrasive, strange, and somehow full of heart. It’s incredibly rare for a genuinely funny show to emotionally gut-punch its viewers, but this one manages it on the regular.

I can’t recommend Rick and Morty enough to virtually everyone, but if you’re a fan of intelligent comedy, creative sci-fi, or just being consistently surprised by great writing, I especially urge you to give it a chance.

Credit: The mashup was created by Youtuber Mylo the Cat. He’s got some pretty neat Muppets + hip-hop mashups too.