Somehow, Viet Cong flew under my radar for the entirety of 2014. It’s my fault, really. Several friends let me know that half the members were from the short lived but brilliant Canadian band Women, and several more friends simply stated that they made balls out noisy punk-stained rock. The kind that’s darkly beautiful and complex in an unassuming way. The kind that I love.

Hear for yourself; here’s the moment I realized that this is perfect.

This song exemplifies what I love about Viet Cong’s sound. It’s a three part suite in miniature, shaped at a glance like some post apocalyptic cousin of The Beatles’ Happiness Is A Warm Gun. We enter with a softly grinding drone and muted drum machine tumbling down stairs. The song bursts wide open with harmonized vocals and a sharply panning metallic guitar strum, while an insistent drum throb swells in the background. Finally, iridescent guitar tones rocket toward the sky. I don’t know if I’m hearing a weirdly tuned synthesizer or effects-laden guitar work; it doesn’t matter. The song absolutely explodes into a rave-up ending that had me grinning from ear to ear, determined to buy this album the moment it’s released.

The weird thing is, I was finally sold on giving these guys a try with a friend’s comparison to This Heat. The legendary experimental band from England released only a pair of bewilderingly fresh albums and disappeared at the turn of the 80s, leaving an indelible legacy that’s rarely touched, much less spiritually evoked. If you’re at all familiar with that band, give this your rapt attention. Right now. See also: fans of The Stooges, Public Image, Ltd., Bauhaus, and probably The Velvet Underground. What these bands have in common is a tough, motor-driven veneer with a knotty, heart-on-sleeve artfulness at center. Mining deeper into this territory, Viet Cong marries ragged noise and unapologetic beauty. 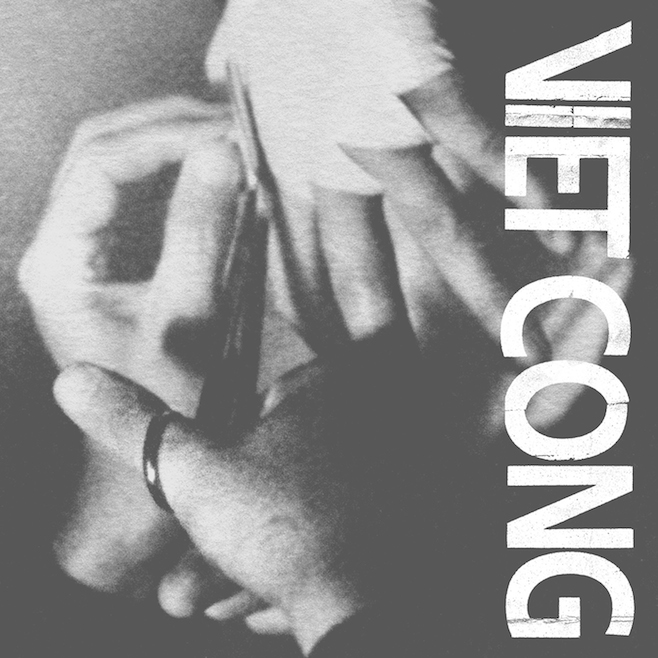 Check the Viet Cong bandcamp page for another free tune, plus links to purchase the debut album in every format. One listen, and you’ll want to repeat these 37 blistering minutes as often as possible. Keep an eye on this page for the album’s first single and music video.