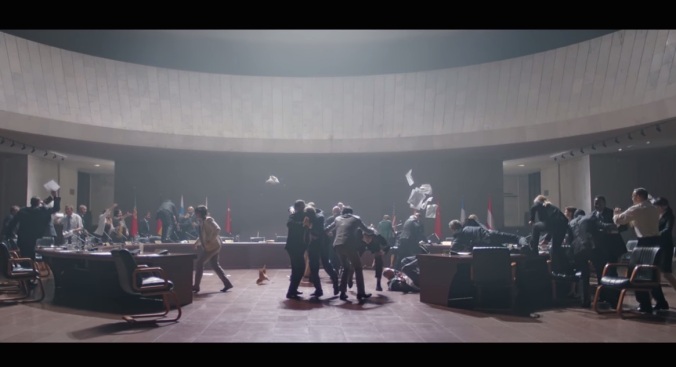 Did you know DJ Shadow released a new album this year, and that it’s pretty good?

Nobody Speak is of the unquestionable highlights,  a team-up with hip-hop superheroes Run The Jewels. Now there’s a hilarious, action packed video to go along with it.

While I used one of the more atmospheric tracks in my Night Drive mixtape a couple months ago, I didn’t give nearly enough attention to the rest of the album. The Mountain Will Fall may be sprawling and a little unfocused, but it’s dotted with bursts of unbridled creativity and purpose. This wild video reminded me that it also brought the first new Run The Jewels material in over a year.

While the rapid-fire raps aren’t as politically charged as on their own albums, el-p and Killer Mike throw barbs like missiles back and forth over a thundering beat, dancing over guitars, live drums, and buoyant horns. Cyberpunk synths enter the fray halfway through the song, taking the intensity up another notch. Head nodding, foot stomping, it’s probably the most directly crowd-pleasing song DJ Shadow has ever produced.

You can hear the full album streaming on Spotify or purchase from a number of outlets right via the DJ Shadow website.