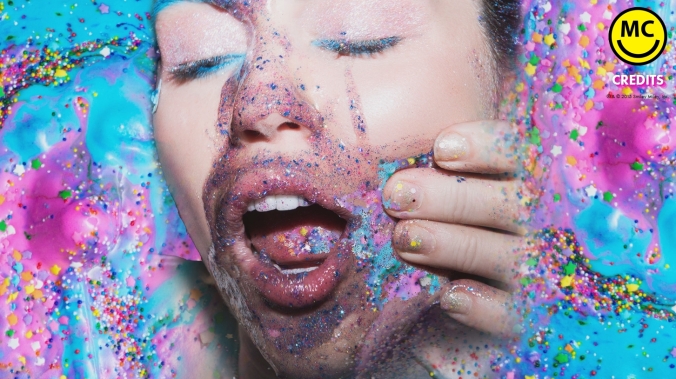 So it turns out that all the BFF-ing Flaming Lips leader Wayne Coyne did with Miley Cyrus over the past year was actually in service of art. It’s called Miley Cyrus and her Dead Petz.

I just woke up and have nothing more to say about this, other than: it sounds like Miley Cyrus backed by The Flaming Lips. Or rather, it sounds like a particularly fizzy Flaming Lips album with Cyrus on vocals. I’m only a few tracks in and it’s… not bad at all. Enjoy?

They don’t allow embedding, so you’ll have to go here:

Several tracks in, I’m calling it now: this is sounding pretty much like the Heady Fwends compilation, but it will be widely loathed by “true fans” of the Lips because of Cyrus’ involvement.

To me? I’m something of a Lips fan, owning every one of their albums going back to 1983, and I welcome this just as any other they’ve done. It’s not that far off from their post-Yoshimi sound; it’s just a far weirder album than you’d ever expect from such a gigantic pop star.

Also, while you listen the page swirls an unending stream of candy-colored liquid imagery over Miley’s face! (You can minimize the page and keep the music running)

Here’s what I’m liking about this project: I think of the fact that, however small, there’s a percentage of her huge fanbase that are going to follow Cyrus down this rabbit hole and discover some fucked up psychedelic music, really opening their minds to something new. That’s always a good thing.

There’s a video for the first song on the album. It’s a bracing electro jam with a vocodered-to-shreds Miley leading the charge with lyrics like:

The video pretty much consists of a lot of sticky stuff, glitter, candy, and an extreme close up of Miley’s mouth. Take from that what you will.