I haven’t posted a weekly update in a while, so it’s about time. A lot happened, but I’ll stick to the highlights.

I hung out in wine country, biked about 500 miles, and finally saw my Japanese metal superheroes Boris in concert. Then I found myself on an extended deep dive into all the 60s jazz that I skipped over in the past. This total immersion is resulting in another evolution of taste.

END_OF_DOCUMENT_TOKEN_TO_BE_REPLACED

I forgot how much I loved this song.

Despite the title, the lyrics are actually about all sorts of insecurities that we find ourselves plagued with. The song happily dances upon the surface of existential loathing, a buoyant celebration of being weird and alone and, on rare occasion, freaking out and having some unbridled fun.

I’d never seen the video before today, so I’m thankful I thought to look it up. The band members star as put-upon losers who let loose a bit of anarchy in the driving, instrumental second half of the tune. It’s basically what I saw in my head every time the song played, a cathartic release of tension and inhibitions. After all these years, it’s still a burst of joy.

The Boo Radleys may be remembered in Britpop history for their 1995 breakthrough Wake Up!, but I’ve always had a much softer spot for the previous album, Giant Steps. Wish I Was Skinny is a bit of a red herring, since the rest of the album is a turbulent, dizzying race through a dense series of wild sound worlds.

It’s an incredibly ambitious psychedelic pop album, veering from washed out shoegaze to broken jazz explosions, infused with an uncanny pop sensibility that makes even the noisiest parts endearing. It was ballsy to name an album after the John Coltrane masterpiece, but if anyone in the world of 90s British rock deserved to use it, it was this band.

If you become nauseous at the mere mention of Oasis, don’t worry. These guys have more in common with Mercury Rev or My Bloody Valentine than those lamentable torch-bearers for British pop overseas.

I’ve been really feeling Stereolab lately. Their incredibly unique mixture of old fashioned jazzy pop, electronics, and the motorik pulse of krautrock was the reason they were one of the first bands to ever be called post-rock.

If you’ve never heard them, you’re in for a real treat. This is the 18 minute epic centerpiece of their second album, 1993’s Transient Random-Noise Bursts With Announcements.

END_OF_DOCUMENT_TOKEN_TO_BE_REPLACED

Here’s an admission: shoegaze is still one of my favorite genres. The gauzy dream-sound of guitars blurred into pure haze.. it’s never left that soft, nostalgic center of my brain. Effects pedals, ghosted vocals, and a sort of spectral swagger will always their place in my heart.

Today I listened to Slowdive‘s monumental second album, Souvlaki, and it all came flooding back. I got those old familiar chills right in the middle:

Here She Comes is the simplest, most direct song on the album. The impressionistic lyrics are just dark and weird enough to not seem juvenile; combined with the melodic cloud of hand drums and reverb-laden guitar, they form a surreal love poem.

Since the band recently reformed, I’m hoping for at least one chance to see Slowdive perform in this lifetime.

Someone was kind enough to upload the entire Souvlaki album on youtube, so give it a listen if you don’t already own it. As one of the best albums of the 90s, and easily one of two or three crowning achievements of the shoegaze genre, it’d be a damn shame to miss out on this experience. Buy the album for less than $10, if you’re interested. Or listen first below. 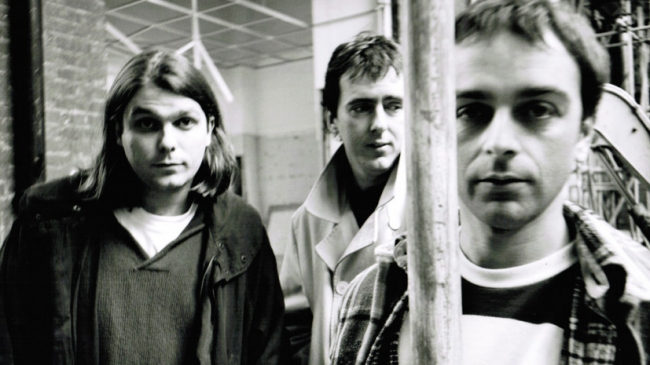 Languishing for two decades in the rare original Dark & Long single, Underworld’s Thing In A Book is finally seeing the light of modern day this month. Courtesy of the 20th Anniversary Super Deluxe edition of legendary dance album, Dubnobasswithmyheadman, the wider world can appreciate what has been one of my favorite hidden gems for years now. It’s a 20 minute minimal techno monster, an otherworldly take on Dark &Long that jettisons our solar system, hitting light speed on the way to stars beyond.

END_OF_DOCUMENT_TOKEN_TO_BE_REPLACED

Seefeel are an extraordinary, epoch-defining band, a group which one often finds name-checked in the write-ups of other essential music. Their debut album is a groundbreaking masterwork that exists far outside of time.