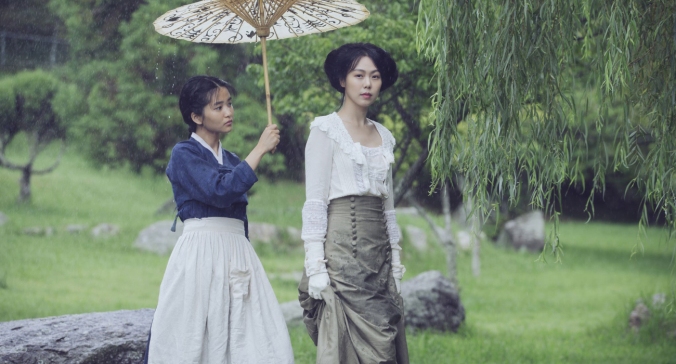 I’ve followed Park Chan-Wook’s career for almost fifteen years now, and I’ve come to realize that his work is always two things: terminally stylized and consistently surprising. From the dark “vengeance” trilogy to this impossibly baroque thriller, his films are unmistakably his own, yet always advancing, incorporating fresh ideas, turning into something new.

The Handmaiden surprised me with both its restraint and its storytelling ambition, mixing lush cinematography and subtle black humor in a fresh take on a classic narrative framework. We see the same events unfold from two points of view, leading up to a moment that begins as chaos before turning into something altogether choreographed. The film tips into its final third, where we witness the aftermath, the falling dominoes revealing a new pattern.

It’s a Hitchcockian thriller with a few modern twists and a steaming dose of sensuality. The plot begins in 1930s Japan-occupied Korea, revolving around a young thief being hired as the handmaiden to a rich foreign heiress, to secretly help her scam artist friend gain the rich woman’s hand in marriage. Devious machinations click into place, motives are revealed, and suddenly – poof – the rug is pulled out from under us. Before there’s time to breathe, the movie reboots from the point of view of the heiress, building toward that inevitable moment with a genuinely fresh take on the timeline. I was riveted by the whodunit nature of the story as much as the sumptuous visuals and delicately stunning score.

Once we reach that pivot again, the plot begins to take flight, offering a viewpoint somewhere above and beyond the action so far, both reacting to it and, in my view, commenting on it. I haven’t read any interviews yet, but I feel like Chan-Wook is more than aware of the fact that certain parts of this film look right into the male gaze. There’s a lot of brazen sexuality, and it fits the plot, teasing the edge of comfort in a tender way. The Handmaiden is unabashedly passionate in both its plot and its delivery. It’s a sensual experience, rich in style, full of respect for its story and characters.

For what it’s worth, I mentally noted at least a dozen shots that I’d love to save as desktop backgrounds. Chan-wook has always been known as a visual stylist, but this one takes it to a newfound depth of classical style. Less reliant on gimmicks, more assured control. It’s clearly the work of a master director who still has more to say.

I just wanted to note that I’ve decided to expand my writing on films into their own category. Last year I tried a “What I’m Into This Week” experiment, involving music, video games, and movies, but canceled it after failing to see engagement. Now, I’m just writing directly about film and I hope it adds another interesting wrinkle to the site.