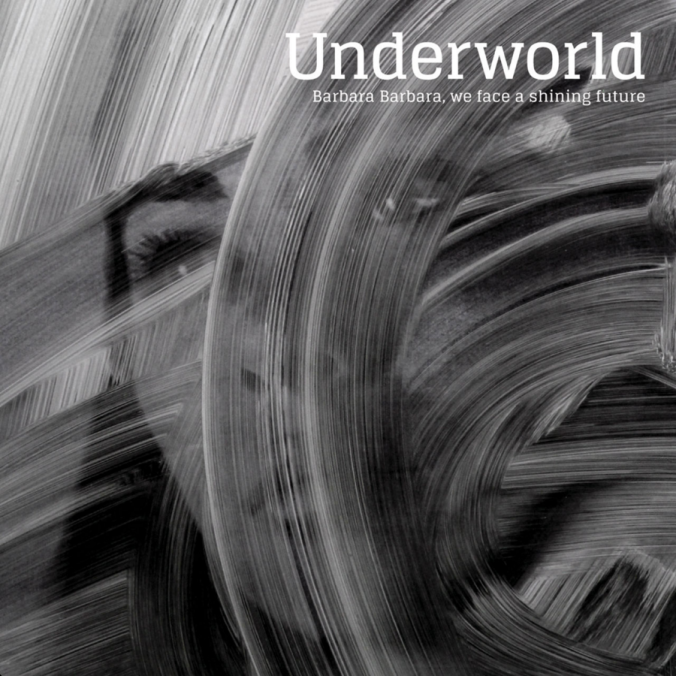 Underworld may finally be settling down, but it’s the most radical thing they’ve done in well over a decade. Instead of reaching to stay one step ahead, the duo of Karl Hyde and Rick Smith sound relaxed and happy to explore their surroundings for once.

Instead of grasping onto their old footholds as the greatest dance sculptors on earth, the group is embracing their role as a metaphysical soul band. Instead of the ecstatic rush of Born Slippy, we get the wobbling hum of Motorhome. Instead of transcendent club burners, we get meditative weirdo pop for the 23rd century. It’s perfect in its own way.

The phrase that kept popping into mind doesn’t make a lick of sense but it purrs like a neon sign up close:

I can’t explain it but I know the feeling: it happened during a weird moment when I realized that the band I loved, then wrote off, then loved again fleetingly, then gave up again in a fit of disappointment.. that band got their shit together and made exactly what I always kind of hoped they might, at some point down the line. They made a record where the sound feels beholden to no one but themselves, without sounding quite like anything they’ve done before.

After the awkward but occasionally fun experiment of 2010’s Barking, in which each track was finessed by a different producer before Underworld fitted it into the whole, I was relieved to hear that they’d be working alone this time. I still hold love for 2007’s erratic Oblivion With Bells and 2002’s confused A Hundred Days Off, the pair of occasionally beautiful, thoroughly mature electronic albums made during their decade-long hangover from the spotlight. Still, they were never up to the task of repeating their era-defining work in the 90s with Darren Emerson.

By the third listen of Barbara, it’s clear they never should have bothered chasing that peak. When the duo finally lets go like this, the freefall is stunning to behold. Genre signifiers melt into sonic magma, bubbling out in new forms, folding back in and disappearing forever. There’s a tactile sense of real instrumentation throughout, cresting with the Flamenco guitar of mid-album interlude Santiago Cuatro, but an electronic glow permeates every moment, bulging and swaying with an unseen gravity.  The album’s emotional peak, Motorhome, is a minimal-maximal ballad in the vein of Hey Jude. Thin drums skip over a sea of disembodied open vowels and throbbing hums, but a distinct buzz creeps into the mix. A single phrase keeps repeating, growing, “what don’t lift you drag you down, keep away from the dark side,” sounding like an old familiar anthem beamed in from another timeline. Slowly coming to the fore, a jigsaw synth arpeggio erupts midway and repaints the entire song as it echoes over an extended coda. I’m reminded of nothing more than the iconic Terry Riley-inspired organ intro to The Who’s Baba O’Riley. It’s nervy, weird, and profoundly affecting.

I’m drawn back to my favorite moment in the group’s back catalog, Second Toughest in the Infants, not in sound but in emotion. That 1996 album was a mutant-techno monument to confused imagination and forsaken desire, and its slow, darker corners always kept me around long after the rush of the beat faded.

While each of the seven tracks on this album burns with its own distinct energy, they all share a deep seated empathy for the lost things in life. Underworld has always made anthems for loners, losers, and the hopelessly lost. With Barbara, they’ve finally shed the impulse to call these souls to a new place. They’ve finally become the band they’ve been all along, hiding just below the surface.

The final tune, Nylon Strung, is an ascendant piece, shedding weight as it climbs. A familiar Karl Hyde stream of consciousness vocal rides the beat, repeating “open me up, I want to hold you, laughing,” as warmly as any Underworld album has ever ended. A final sound emerges, echoing “carry me,” into oblivion.

I wish that I could have shared more than this, but for right now, Underworld only has a preview sampler of the album and the truncated video version of the lead song.

If you’d just like a taste, here’s the sampler:

If you’re already familiar with the group, and you can accept the fact that their singles rarely evoke the real feeling of their album versions, check out the dorky, minimalist video for I Exhale. It’s literally just Karl Hyde swinging a door for three minutes. It’s kind of admirable how little of a fuck they give.

As of Friday, March 18, you’ll be able to buy the album everywhere. But maybe you’re interested in buying the vinyl preorder right from Underworld.

2 thoughts on “Underworld – Barbara Barbara, We Face a Shining Future”