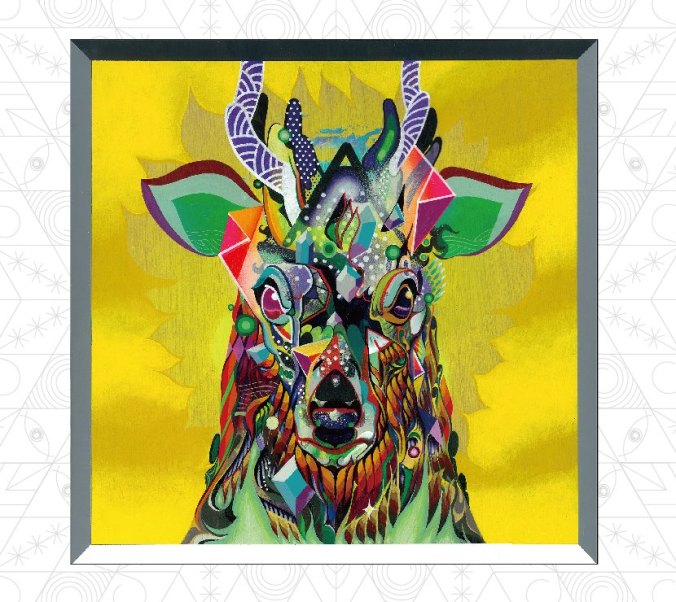 When I saw the name Gr◯un土 on a list of recently released albums, my first thought was to pass right on by. After all, there are countless indistinct artists with unpronounceable ascii-fun names. Then I saw the cover art and was intrigued. Something called to me. I found a stream of Vodunizm and a smile immediately crept across my face.

It’s a feeling I haven’t had so fast in a long time. Total buoyant physicality; my body had to move. Shoulder shrugs at the desk turned into dancing around my apartment, spilling coffee on my pajama pants and scaring the cats. Dancey, approachable music rarely hits me with such a visceral impact. The first phrase that ran through my head was, “interstellar rave music for a misty mountain jungle sleepover.”

After a bit of digging, I realized that sentiment wasn’t total nonsense.

Written in English on his Facebook profile, the artist’s own statement sums up the intention here pretty well. It’s earnest and guileless and I love it. He’s talking about the title track, “in which indigenous beats gradually permeate and resonate with the psychedelic overdub sounds, the festive sound world that freely runs through organic~cosmic~Balearic realms makes our brains totally shiver!” However cheesy that might seem, it paints a warmly specific picture in my mind.

The music structurally reminds me of slow motion dub techno, but it’s far too active and bright to fit with Basic Channel or Deepchord. The mood leans into the celebratory tent, all neon strobes and moving bodies, yet the tempo is suited for the chillout room. I’m sitting here on my third listen, fourth cup of coffee at noon on a Saturday, and it sounds perfect. That says it all.

The deep, rubbery beats are sprinkled with a galaxy of tangible  instrumentation, whether sampled or recorded live. Songs erupt, cut through with traditional Japanese percussion, bells, and chimes. Obvious samples are rare, but at one point the classic Godzilla roar makes an appearance. The fact that it’s not jarring or dumb says a lot about the otherworldly context.

These tracks manage to dilate time, slowly expanding in a beat cloud of unknowing. I felt lost inside a mere 4 minute song at the center of the album, ping ponging between antique female vocal samples like a foggy hall of mirrors. At 77 minutes, it’s a long album, but it felt like waking from a dream at the end, the homogenous sound washing tracks together in memory. It’s a cohesive sound world that I want to be cocooned in.

Some time during my second go-round, I realized that this percussive, almost tribal atmosphere was reminding me of nothing so much as Boredoms’ magnum opus, Vision Creation Newsun. Both albums stand as futuristic productions built from the dizzying interplay of tactile, timeless elements. The unyielding beat, the blend of ancient and modern textures, the  sun-worshipping mood, these all connect the album to a time and place that seems long gone in our world. This album engaged my nostalgia center without directly referencing anything I’ve listened to, in the past or today.

Within minutes of clicking play I was scouring the internet to find out more. It seems Gr◯un土, aka DJ Ground, is from Osaka, Japan. This is, maybe not coincidentally, where my beloved Boredoms are from. He’s well known there as the main organizer for ChillMountain, an outdoor music festival that’s been going on for a decade, which really explains the time-stretching dynamic of his music. I can imagine floating on beats like this for hours amidst a sea of bodies and glowing lights in the thinned atmosphere.

Vodunizm is his debut full-length album, a fantastic introduction to this sound. It’s always flirting around the edge of familiarity before taking off down new paths, mining history and cinema for inspiration. It feels like an utterly complete artistic statement.

The album is digital-only for now, and you can get it for 1800 yen on Bandcamp. Google tells me this is roughly $15, which makes sense. I’m emailing to ask about a possible physical release, but until then I’ll enjoy it right here.